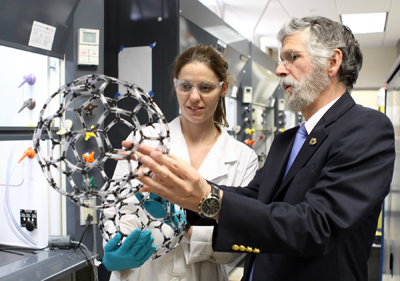 When Luis Echegoyen, Ph.D., joined The University of Texas at El Paso in 2010 as the Robert A. Welch Chair in Chemistry, one of his goals was to put together a multidisciplinary team of researchers who were interested in developing high-efficiency photovoltaic systems.

About 25 faculty members from chemistry, engineering, physics and science met once a week to discuss their areas of expertise and exchange ideas.

“We were learning from each other,” said Echegoyen, who previously served as the Director of the Chemistry Division at the National Science Foundation (NSF).

Echegoyen’s efforts to organize the UTEP Solar Group have resulted in a $3.3 million award from the National Science Foundation to create a collaborative research and education program between UTEP and the University of California, Santa Barbara. The program will combine materials science and engineering research to develop new materials for photovoltaic applications, or solar panels.

The award is from the NSF Partnerships for Research and Education in Materials (PREM) grant program that will establish a long-term partnership between UTEP and the University of California, Santa Barbara’s Materials Research Laboratory: an NSF Materials Research Science and Engineering Center.

The UTEP-UCSB PREM program will enhance the participation and advance degree attainment of under-represented minorities, primarily Hispanic students, in materials science and engineering. As part of the program, UTEP students will be able to participate in research internships at UCSB and vice versa. The program also allows UCSB and UTEP faculty to jointly teach advanced educational courses remotely to students at both campuses.

“UTEP and UCSB students will have unique possibilities to work collaboratively in new materials research areas of direct relevance to solar energy,” said Echegoyen, PREM’s principal investigator. “We anticipate true synergistic outcomes to emerge from this collaborative partnership at the frontier of materials research for photovoltaic applications.”

Craig Hawker, director of the Materials Research Laboratory at UCSB and co-principal investigator for the award, said the PREM award “is a chance to make a broader impact, and to excite and inspire the next generation of scientists and engineers at UCSB and UTEP.”

“The UTEP-UCSB PREM will pursue research at the cutting-edge of photovoltaic materials research, developing new materials essential for efficient photovoltaics to be formulated,” Hawker said.

Each of the researchers from the UTEP Solar Group, along with seven faculty members from UCSB, will work with undergraduate and graduate students to develop organic photovoltaic applications.

“One of the things I like about this is that it’s a joint venture between engineering and science faculty,” Echegoyen said. “It’s time for these historical barriers that have existed between faculty to come down. The interfaces of chemistry to materials and to biological systems is where the action is, and that includes engineering, physics, and multidisciplinary approaches to solving problems.”

Researchers currently use inorganic materials such as silicon to create thick, heavy and rigid solar panels, which exhibit good efficiencies but are not optimal from many perspectives.

Echegoyen hopes to develop higher efficiency photovoltaic cells using organic materials that will result in flexible, thin, light and colorful solar panels that can efficiently absorb light and can be mass produced.

“I want to see the development of brand new materials,” Echegoyen said. “I want to see new paradigms and new concepts in the preparation of these solar cells.”

Each researcher will contribute his or her unique expertise to the development of the photovoltaic materials.

David Zubia, electrical and computer engineering professor, uses computers to calculate how atoms come together to make crystals that are used to make solar cells.

Zubia has been working on solar cell research for several years and said it was natural for him to participate in the program, which allows him to continue his research and also add the computational dimension.

“It is important to make more perfect crystals since solar cells work better when the crystals have a low density of imperfections,” Zubia said.

The UTEP-UCSB PREM program is expected to launch in the fall. Over the next five years, the program will enroll more than 30 undergraduate students and more than 20 doctoral students.

Funds will be used to pay for the students’ salaries and travel, and for materials and supplies.

Echegoyen said that the PREM program between UTEP and UCSB is predicated on the basis of scientific parity, with both institutions making equal contributions to the research. He hopes to kick off the program with a scientific symposium at UTEP where researchers from both universities will meet and share ideas.

Echegoyen recently coordinated and submitted another project to the NSF that, if funded, would constitute another step in the energy research development at UTEP. The NSF program is called Partnership for International Research and Education (PIRE) and would involve collaborations from researchers in China, Germany, Spain and Japan, and from the University of California at Davis, the University of Washington, Cornell University and Luna NanoWorks, a technology development company.

“If we succeed in producing good science out of the PREM and if we receive funds for the proposed PIRE program, we’ll be in good shape for something bigger like an energy research center in the future,” Echegoyen said. “Of course, that’s many years from now.”

In addition to overseeing the PREM and the PIRE programs, Echegoyen is one of two candidates selected to be the 2013 president-elect of the American Chemical Society. If elected this fall, he would travel the world as the face of the ACS, the world’s largest scientific society.

“It’s one of those things of being careful what you wish for,” Echegoyen said with a smile.