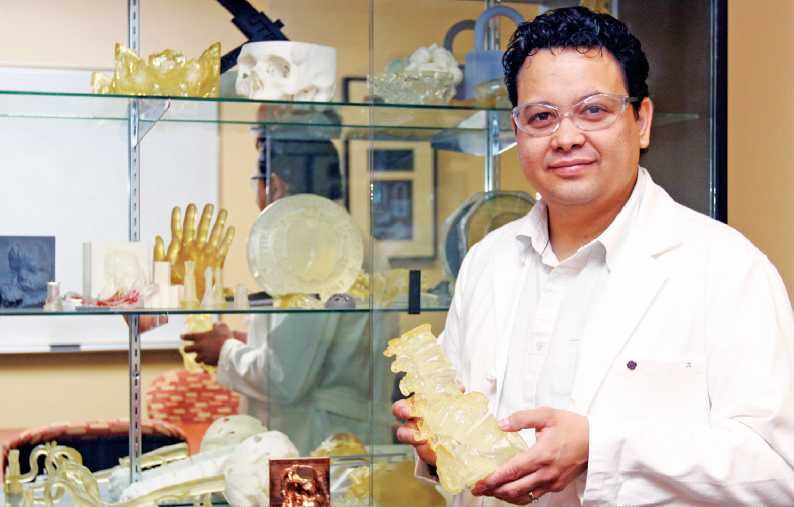 For the past decade, the 3-D medical modeling program within the W.M. Keck Center for 3-D Innovation in the UTEP College of Engineering has been manufacturing replicas of human body parts for El Paso surgeons to use as diagnostic or pre-surgical tools. Center manager Frank Medina and his team of student researchers are working under the leadership of Keck Center founder and director Professor Ryan Wicker, Ph.D., to create 3-D models using a number of advanced materials and manufacturing technologies to simulate the anatomies of spines, abdominal aneurysms, cardiovascular and craniofacial abnormalities, human jaw bones and even the human brain.

This multidimensional modeling approach allows surgeons to study a physical rendition of a specific patient, and thus potentially improve the surgical outcomes, while decreasing the time the patient spends in the operating room, and in many cases reducing the cost of surgery. Wicker said he would like to also extend the Keck Center’s services to El Paso veterinarians to help advance the health care of their animal patients.

The process begins with a patient’s CT or MRI scan and transforms these images into a 3-D computer model. Models can then be manufactured using advanced materials such as thermoplastics or metals in 3-D printing or additive manufacturing machines that build complicated models up in layers beginning with nothing, rather than the subtractive process of carving out a shape from an existing block of metal or plastic.

The Keck Center also has the capacity to produce personalized hip and knee replacement parts, as well as facial prosthetics and skull plates, using 3-D printing technologies. In one procedure that recently received FDA approval, an electron beam is used to melt medical-grade metals and alloys to replicate the bones or joints for prosthetic surgeries or implants.

Wicker, who holds the endowed Macintosh Murchison Chair in Engineering, has partnered for many years with Stanford University to fabricate models that assist in cardiovascular research. His team is able to construct models of the cardiovascular system, which in turn helps both Stanford and UTEP researchers identify the origin and pathology of heart disease. The technologies they have developed extend beyond health and have been used extensively by his Stanford colleagues to study complicated flow systems, such as those found in aircraft engine turbine blades.

The Keck Center’s commercial and experimental additive manufacturing capabilities have grown from one machine in 2000 to more than 30 machines today, including two patented and several patent-pending technologies developed by Keck Center researchers.

“There is an increasing need for modeling in medicine and in manufacturing,” Medina said. “UTEP has received requests from Fortune Top 10 Companies, local inventors and the UTEP research community for help with prototyping.”