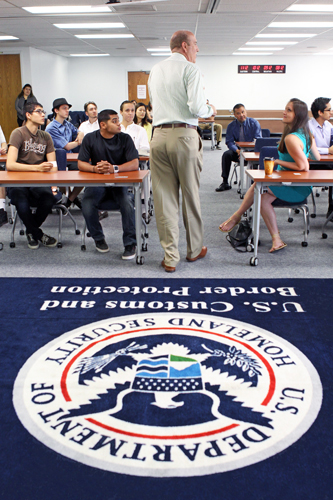 Even as some government budgets get squeezed, mutually beneficial programs such as The University of Texas at El Paso’s Homeland Security Summer Scholars Academy are shining brighter.

The 4th annual academy, an education initiative developed and coordinated by UTEP’s National Center for Border Security and Immigration (NCBSI), brought together eager undergraduates from universities around the country – including UTEP – to learn more about career opportunities in homeland security. They teamed up with UTEP faculty to research security related topics and visited the El Paso offices of the FBI, Customs and Border Protection, and Immigration and Customs Enforcement to learn first-hand what, why and how things get done.

“Taxpayers’ money is being put to good use,” said Victor M. Manjarrez, Jr., associate director of UTEP’s National Center for Border Security and Immigration (NCBSI), which oversees the academy. The former U.S. Border Patrol sector chief in Tucson and El Paso, Manjarrez said the scholars produce valuable research and in return learn about potential career options. “It’s a win-win all the way around.”

The scholars understand that everything they do during the 10-week academy will help them with their academic and professional pursuits.

“The academy is a stepping stone,” said Julia Fuller, a junior double major studying criminology and criminal justice and psychology at the University of Maryland – College Park. She said the summer assignment builds on her past research on terrorism and gives her a first-hand perspective of border issues that most people around the country do not see.

Fuller is working with UTEP psychology professor Michael Zarate, Ph.D., to study the effects of religion and leadership on conformity and compliance. Her goal is to earn a doctorate in legal psychology and work for the State Department as a counselor, researcher or policymaker.

Annie Rhodes, a senior at the University of Notre Dame, said her participation in the academy, especially the research component, will give her a leg up on graduate school. The scholar, who is majoring in French and sociology with a Latino studies concentration, is researching economic security among immigrants with Ernesto Castañeda-Tinoco, Ph.D., assistant professor of sociology and anthropology. She was amazed at the paid research opportunities for undergraduates at UTEP and the amount of respect student researchers receive.

“We’re seen as peers. That’s a great confidence builder,” she said during a break in Union Building East. Rhodes plans to earn a Ph.D. and conduct immigration or humanitarian research before transitioning to teaching or working for a nonprofit agency. “We’re all doing important stuff. Our research will be printed in important journal articles and books.”

UTEP’s Ashley Bangert, Ph.D., research assistant professor of psychology, has participated in three of the security academies. She praised her scholars as bright, engaged, dynamic, eager to learn about border issues, and able to fit in with the UTEP students who work in her lab.

Bangert said the scholars have made important contributions to her multi-year study on improving memory among older adults. This “cognitive aging” research is funded by a grant from the U.S. Citizenship and Immigration Services office. She added that students get a taste of the various aspects involved in research, such as recruiting test subjects, interacting with them, analyzing data and presenting findings.

“My students have been motivated. They pick up on things quickly,” she said. “The quality of their work has been stellar.”

About 100 students applied for this year’s program, and organizers expect more applications in coming years because of the positive response from students and the agencies involved, said Victor Talavera, NCBSI program manager.

“The program has built credibility,” he said.

Of the approximately 30 academy graduates, 30 percent are in graduate or law school, 30 percent are completing bachelor’s degrees, and 40 percent are employed by a homeland security-affiliated agency. Talavera said that competition among the agencies to hire these individuals is becoming heated, especially for those with science, technology, engineering and mathematics backgrounds.

The 2013 academy will conclude with the scholars presenting their research results from 8 a.m. to 12:30 p.m. Friday, Aug. 9, in the Acacia Room of UTEP’s Union Building East.