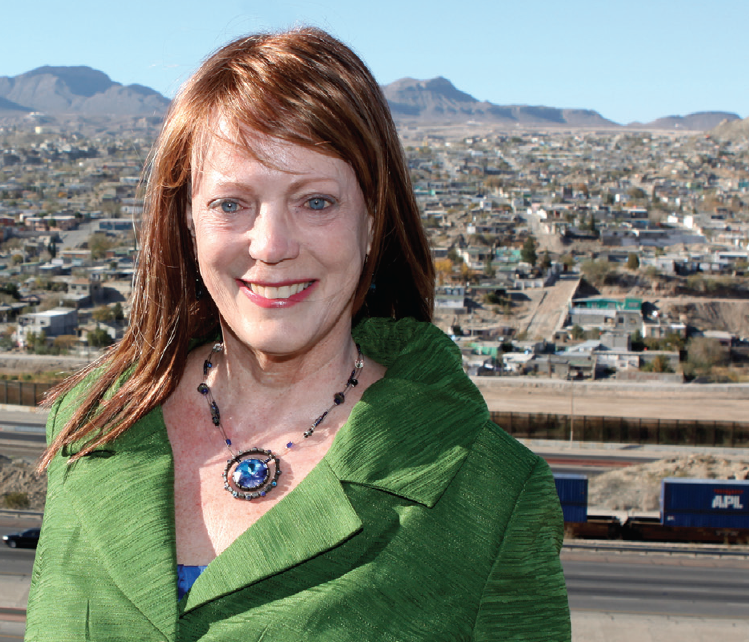 Since opening its doors as the Texas State School of Mines and Metallurgy on Sept. 23, 1914, The University of Texas at El Paso has attracted students from Mexico who consider a degree from a U.S. university a sound investment for their future. Today more than 1,200 students from Mexico are enrolled at UTEP and hundreds commute from Juárez to attend class every day.

They include Maricarmen Vizcaino, who is undeterred by the violent drug war that has consumed her country for the past four years.

“I feel I am the only support my parents have and the only support they will have when they grow older,” said Vizcaino, a UTEP graduate and Ph.D. student in the Interdisciplinary Health Sciences program. Vizcaino lives in El Paso during the week but returns to Juárez to visit family on weekends. “For me, it was a motivation to be better at what I do, to graduate with my master’s (in kinesiology in 2011), and to never give up, no matter the obstacles.”

Vizcaino, a research assistant, is helping with the data and statistical analysis of a study headed by Kathleen O’Connor, Ph.D., an assistant professor in UTEP’s School of Nursing, that examines the mental health impact of border violence on University students.

For more than a year, O’Connor, a  medical anthropologist, has looked at the levels of trauma, depression, anxiety and posttraumatic stress disorder among UTEP students in response to violence along the Texas-Mexico border in Juárez.

“It is not necessary to be personally injured by violent events to suffer traumatic mental health consequences, which can put sufferers at risk for potentially serious physical health problems,” O’Connor said. “We need to understand the effects of violence among our youth and discover the level of awareness among students about resources that are available to them to assist with any mental health issues resulting from the ongoing armed conflict in the area.”

With support from a $17,500 grant from the Hogg Foundation for Mental Health, O’Connor interviewed more than 200 Hispanic students from May 2011 to June 2012. They included 40 students who commute from Juárez; students with relatives in Mexico who visit, phone or Skype regularly; and students without close family ties to Mexico.

Students answered questions from the Harvard Trauma Questionnaire, which is used to examine trauma among refugees and individuals who have been displaced by war or genocide. It asks about painful experiences and includes a narrative that allows participants to speak openly. Participants were asked about the worst thing that ever happened in their life and the worst thing that happened to them recently. O’Connor also used the Hopkins Symptom Checklist to measure anxiety and depression.

She said there were six traumatic events that came up frequently and were significant predictors of mental health issues, but the most common was being confined to their homes.

“It seemed to create a whole lot of anxiety and depression, just feeling like you had to stay home because it was too dangerous to go outside,” O’Connor said.

While most English-speaking students were aware of UTEP’s mental health resources, such as the University Counseling Center, commuters who primarily spoke Spanish were not. Regardless, most of the students told O’Connor they would not seek services.

“They don’t talk about it,” O’Connor said.

“That’s a very  ommon coping mechanism: clinically, it is called ‘avoidance.’ People block negative things out or talk about something happy. They get dressed up and go out with friends, they keep it together with their studies, but they just don’t talk about the violence.”

Instead, continuing their education at UTEP is what probably keeps them going, O’Connor said.

Adriana Lopez’s parents insisted their daughter move to El Paso while she attended UTEP to avoid the danger in Juárez. Lopez, who earned her bachelor’s degree in business in 2011, returned home in 2010 but she said her morning commute to get to class by 7:30 a.m. made her nervous. She would check her car every day to make sure that no one stashed illegal drugs in her trunk. But she was determined to finish school.

“I coped with it on my own and my family was supportive, but it’s not like I  poke about my problems,” said Lopez, who did not participate in O’Connor’s study. “It was school and work that made me keep my mind off of that. I was really more stressed about exams than the violence.”

O’Connor was surprised that students opened up to her instead of a counselor and believes that sharing a narrative as part of the mixed methods questionnaire made a difference.

“There’s a proven therapeutic value to providing a narrative,” O’Connor said. “In Spanish they call it ‘testimonio .’ If you can get someone to talk about it in a safe space, then it really unburdens them. This allows the processing of traumatic events, and the healing, to begin.”

Sherri I. Terrell, Ed.D., the counseling center’s director and a psychologist, said that students with post-traumatic stress disorder can be treated successfully.

“Inevitably, all of my students who have posttraumatic stress disorder will ask me, ‘When will I stop thinking about this? When will it go away?’” Terrell said. “And I tell them, ‘You’ll always remember the incident, but when you’re healed, you won’t re-experience it anymore.’”