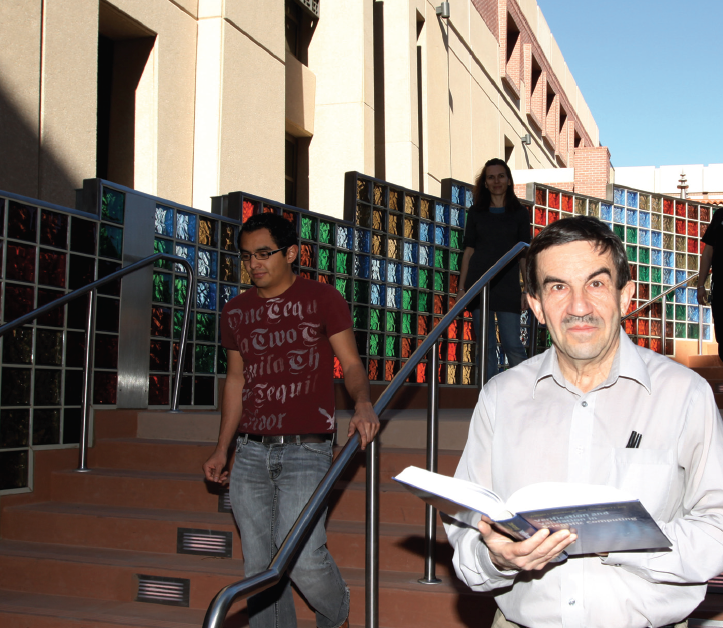 Kreinovich, who supervises more than a dozen students, a number of them Ph.D. candidates, is currently guiding their study of gravity, seismology, and the environment for three collaborations in the UTEP Cyber-ShARE Center. His team works alongside UTEP’s geoscientists, environmental scientists and computational scientists to gather, merge and analyze uncertain and fuzzy data that might help predict earthquakes or determine the impact of carbon flux on weather patterns.

For example, the location and structure of deep geological layers is estimated based on the intensity of the seismic signals recorded at different locations, and on the results of measuring gravity at different places. When scientists combine the information coming from different sources, they receive a clearer picture of the earth’s structure, and thus, of the earth’s seismic activity.

Kreinovich’s students are also participating in a study in the Jornada del Muerto area, a dry desert basin in Southern New Mexico, where UTEP environmental scientists have an eddy covariance tower in place to measure, among other things, the carbon dioxide exchange or carbon flux. The tower’s computer collects and processes the data generated by measuring devices on and around the tower. The students visit the site weekly to maintain the systems.

“The more data we have at our disposal,” Kreinovich said, “the better a model we can provide.”  To that end, Kreinovich also works with computational science researchers in the creation of inversion algorithms that integrate seismic and gravitational data (or environmental data) to develop models that UTEP geoscientists and environmental scientists can use.

Kreinovich’s students are enthusiastic about the opportunities to work on groundbreaking research that could impact computing capabilities. Jaime Nava, who completed his Ph.D. in May, worked with the professor for four years.

“I joined Dr. Kreinovich because I identify with his reasoning in mathematics.  He is very passionate, and always keeps things fun and interesting,” Nava said.

“Professor Kreinovich was an excellent Ph.D. mentor. He provided me with great opportunities to be actively involved in cutting-edge research even in the early stages of my Ph.D. study,” Gang said.” He always encouraged me to propose new ideas in research, and took lots of time to guide my work with patience. He not only taught me the methods of how to do research, he also gave me confidence and eagerness, leading me to love research in computer science.”

Vladik Kreinovich: Emerging from Behind the Iron Curtain

“Knowledge is of no value, unless you put it into practice.”  Anton Chekhov

When Vladik Kreinovich earned his Ph.D. from the Institute of Mathematics of the Siberian Branch of the Soviet Academy of Sciences in 1979, the Soviet Union’s secret police agency, the KGB, limited research opportunities for him and his fellow scientists to the confines of the country’s borders. Early in his career, after being called in by the KGB for sending letters to scientists in Western countries, he learned what to say and do to avoid conflict.

In the 1970s, Revolt Pimenov, one of Kreinovich’s mentors, was arrested and sent into exile. Kreinovich, who wanted to pursue his doctorate in mathematics, was given permission to study with Pimenov for one semester in Komi Republic, an area closed to foreigners. It was here that Kreinovich thrived. He eventually earned his Ph.D. and garnered respect for his work in mathematics.

By the late 1980s, the Iron Curtain was fraying. Word of Kreinovich’s research reached Stanford University, and its administrators invited him to be a visiting researcher. It took a year of haggling with the Soviet government, but eventually he arrived at Stanford. The Soviet Consulate extended his stay and allowed him to bring his wife, Olga, and son, Misha, to the United States.

Since those early days on the UTEP campus, Kreinovich has relished the freedom he has to conduct research without fear of retribution. Perhaps that is why he has become one of the most energetic researchers at UTEP, and one of the most prolific writers of books and papers. He is continually invited by universities around the world to lecture.

Kreinovich will say that his inspiration comes from collaborating with other professors at UTEP, and from mentoring students who share his enthusiasm for exploration and problem-solving.

Kreinovich knows that the freedom to pursue knowledge is a gift that UTEP and this country have provided him. He won’t soon forget how far he has come to enjoy it.