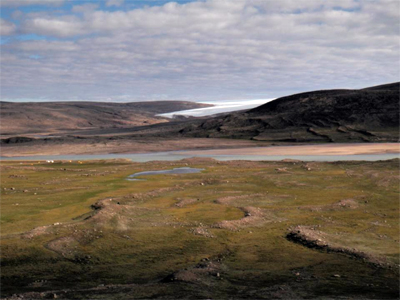 The rate of climate change in the Arctic is at least twice the global average, according Craig Tweedie, Ph.D., associate professor of biological sciences at The University of Texas at El Paso.

That’s why it’s so important for researchers to study the northernmost parts of the Earth, because what happens there affects the rest of the globe, Tweedie said. With the aid of a grant for nearly $750,000 from the National Science Foundation, Tweedie and his team have traveled to sites at the northern tips of Alaska and Canada, as well as far eastern Russia to see how ecosystems have changed in the last 60 to 70 years.

The five-year grant that ends Aug. 31 was one of a series awarded to researchers all over the world as part of the International Polar Year Back to the Future project, an effort to resample research sites around the globe to get a comprehensive look at what has changed in the last half-century, and what that might imply for the future. Tweedie, three Ph.D. students, a postdoctoral researcher and several undergraduate research assistants spent four summers revisiting more than half a dozen sites in Barrow and Atqasuk, Alaska and Baffin Island, Canada that researchers had not sampled or photographed since the 1950s or earlier. They also used data from a previous trip to Chukotka, Russia in 2005.

In some cases, they found “massive changes,” Tweedie said. Glaciers had retreated, the amount of vegetation had multiplied and the number of plant species present at the site had expanded. At other sites, they didn’t detect any change.

“Going back to these old research sites provides knowledge of how the Arctic is responding to change where we don’t have any records of past change,” Tweedie said. “It feels like forensic science sometimes. You’re trying to piece this picture together without all of the optimum evidence that you would like to have.”

But solving the puzzle is important to help predict the future. What happens in the Arctic has implications for climate change around the globe, Tweedie said. As the Earth’s temperature warms, sea levels will rise; precipitation cycles will change, affecting where people can grow crops; hurricanes will intensify; and diseases like malaria and yellow fever can spread to new habitats, Tweedie said.

As the Arctic permafrost thaws and the formerly frozen organic plant matter decomposes and releases carbon dioxide into the air, the warming compounds, Tweedie said.

“There’s no difference from driving around in a big SUV,” he said. “We’re adding another fossil fuel source to the atmosphere. That’s the big worry. At the moment, none of this is incorporated into the climate models predicting the future state of the Earth.”

David Lin, a Ph.D. student in ecology and evolutionary biology who defended his dissertation in June, traveled with Tweedie to Russia in 2005 as part of another grant and to northern Alaska in 2006 and 2007. His study looked at satellite images of Arctic sites and compared them to the conditions he found on the ground. Scientists often use satellite imagery to make conclusions about how the environment is changing to save the expense of sending a researcher to physically sample a site in the remote Arctic region. Lin’s study showed that more green color in a satellite image did not necessary mean the area was warming.

“It was really hard work and really stressful, but it was exciting,” said Lin, who recalled the thrill of taking military transport airplanes, local fishing boats, helicopters and ice breaker vehicles to gain brief access to sites rarely available to foreigners in Russia. He and Tweedie had only a short amount of time at each site and would have to hurry to set up their equipment, take samples and upload the data.

Before his trips to Alaska, Lin and the other members of the team learned to stay safe while working near bears and other wild animals, which included firearms training.

In addition to the concern of wild animal encounters, working in the Arctic presents challenges in terms of weather and resources, making for long days of work and rustic living conditions.

“Vegetation research in the Arctic requires us to make the most out of the three months that the tundra is not covered by snow, so a typical day consists of about 14 hours of work,” said Sandra Villarreal, a Ph.D. candidate in ecology and evolutionary biology who traveled to Barrow as an undergraduate in 2007 and to Barrow, Atqasuk and Baffin Island as a doctoral student during the summers of 2008 to 2010. “Mornings through afternoons were mostly spent in the field, while evenings through nights were spent in the laboratory. Researchers usually stay in the local huts, where we cook dinner for the entire UTEP group in the evenings. Breakfast would be something quick like oatmeal or cereal in the lab, and lunch would be a sandwich and various snacks we would take to the field.”

She and the other students recorded coordinates; took measurements including depth to permafrost, soil moisture, and slope; sampled plant life; and took notes on the environment, usually in temperatures near freezing.

“This experience has been extremely important in developing my skills in the field, such as using a differential GPS, navigating, hiking, etc.,” Villarreal said.

The trips have also helped develop the skills of students on the UTEP campus. As director of the Environmental Science Project in UTEP’s Cyber-ShARE Center of Excellence, Tweedie has made his data available for computer science students to use as test cases for data management. He has also taken advantage of the center’s resources for computational assistance in his own data analysis.

Tweedie and his biology students are now completing a handful of journal article submissions about their work. Tweedie’s goal is to go return to the sites every 10 years to resample them and get a better idea about how quickly the changes are taking place.

“We got really cool work done, we worked well nationally and internationally with other institutions, but really the bottom line for me was a huge part of this project was the fact that we had three generations working,” Tweedie said. “We had the students, we had people like myself — early to mid-career researchers — and then we had the old researchers. These guys were doing some of the first work of this kind in the Arctic.

“Our students are not only learning all the modern techniques for sampling, but they also have an appreciation for history and how things were done in the past.”

For Mark Lara, a Ph.D. candidate in ecology and evolutionary biology who traveled to Barrow, Atqasuk and Baffin Island with Tweedie during the summers of 2008 to 2010, the experiences advanced his knowledge, teaching and critical thinking abilities.

“Originating from the desert Southwest, everything was unexpected and many of our findings were quite surprising,” Lara said. “Understanding how our work advances and complements other work conducted across the globe involving impacts of climate change on Arctic ecosystems is really exciting.”