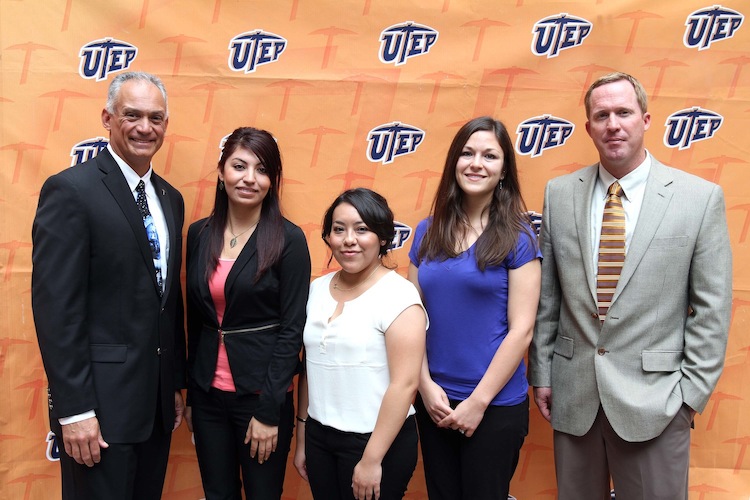 Former NASA astronaut John “Danny” Olivas, Ph.D., has landed at The University of Texas at El Paso as director of space initiatives. He will also lead the newly established Center for the Advancement of Space Safety and Mission Assurance Research (CASSMAR).

“The U.S. is at the dawn of a new era of space exploration, so I am thrilled about this development,” said Olivas, who earned his bachelor’s degree in mechanical engineering from UTEP in 1989. “[The University] has the right people, and the right facilities and capabilities to do this work. Plus, it sits in close proximity to nearby spaceports. It just makes sense to have CASSMAR here.”

As part of the University’s new research focus, NASA’s Columbia Research and Preservation Office at the Kennedy Space Center has loaned UTEP several significant debris pieces from the Space Shuttle Columbia, which disintegrated upon reentering the Earth’s atmosphere in 2003, killing its seven crew members. Faculty and students will initially focus on previously unstudied materials behavior issues that have been observed in the specimens.

“The legacy of Columbia is really about learning. Researchers investigating her will learn what we can do to be safer in the future so that accidents like this do not happen again,” Olivas said. “Students are going to have a unique opportunity to become a part of the leading edge of space exploration. These future space pioneers will be doing research in new areas of research as well as areas that have never been fully explored for applicability to space environments.”

Four UTEP students already have joined the new center’s efforts and begun studying the fragments of the shuttle. They are graduate metallurgical and materials engineering students Brenda Arellano and Mayra Contreras, and materials science and engineering doctoral students Jessica Buckner and Darren Cone.

Buckner is studying structural components from the shuttle known as the crew module x-links and is trying to determine its mode of failure in the reentry environment.

“There’s so much talk about commercial spaceflight these days, it’s important that we have a better understanding of past failures to prevent them from happening again,” she said.

In total, UTEP researchers will study four large pieces of debris, which weigh approximately 750 pounds and include controlling actuators, overhead windows of the shuttle and major structural components.

“Each of the Shuttle Columbia pieces we have contain significant and unstudied characteristics of the entry environment which will demonstrate the need for deeper investigation and understanding,” Olivas said. “Some of the very same materials are being used in the aerospace industry today. Engineers are designing spacecraft with limited knowledge of how these materials react in the reentry environment. Our goal is to perform the necessary research to broaden knowledge for the entire space ferrying community.”

CASSMAR will not only involve the College of Engineering, but the colleges of Science, Business Administration, Education and even Liberal Arts.

The Executive Council has ties to multiple research centers housed at UTEP and will work synergistically with CASSMAR. Cyber-ShARE is a state-of-the-art computer science center that can support CASSMAR’s needs in knowledge, data sharing and integration. The Future Aerospace Science and Technology (FAST) Center will be a magnet for aerospace science and technology research by linking academic and entrepreneurial opportunities to NASA, the Department of Defense, and the Department of Energy.

CASSMAR will also partner with the NASA-affiliated Center for Space Exploration Technology Research (cSETR), which conducts innovative research in propulsion and energy engineering. Key projects in cSETR include studying liquid methane as a form of green fuel to power future space shuttles and the construction of bricks using moon dust to create structures on the moon. Also, the NASA Science, Engineering, Mathematics and Aerospace Academy (SEMAA) and Aerospace Education Lab (AEL) will work with CASSMAR to enhance access and opportunities in science, technology, engineering and mathematics for K-12 students.

“Spaceflight is a collaborative solution,” Olivas said. “As an astronaut, you don’t get to space on your own, you stand on the shoulders of giants who put you there.”