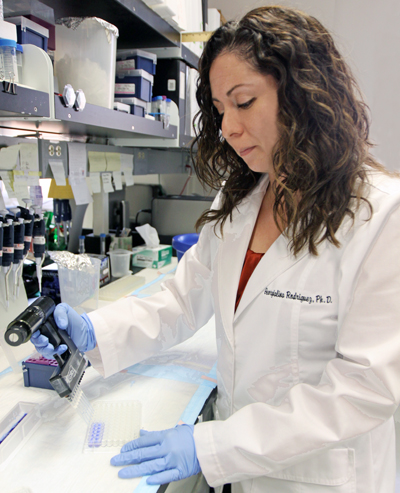 A new medical concept may hold the key to cancer and many other serious health issues – including traumatic brain injury (TBI), Alzheimer’s disease, and multiple sclerosis, among others.

Invented by Premier Biomedical, Inc. and researched in the labs of The University of Texas at El Paso, the Felder Doctrine is a methodology similar to dialysis, where disease-causing compounds are neutralized and then removed from a patient’s body fluids, thus eliminating the disease altogether.

In May 2012, the company recruited UTEP to conduct preliminary research on the technique to see if the concept was feasible. After two months of experimentation, the scientific staff at UTEP determined that the technology was feasible, and the relationship between Premier Biomedical, Inc. and UTEP was consummated.

“I am incredibly impressed with UTEP, particularly Gary Williams and Dr. Robert Kirken and the way they have professionally and aggressively conducted the experiments,” said William Hartman, president and CEO of Premier Biomedical. “We have achieved more in one year than we optimistically thought we could in two years.”

So far, the technique has been most successful in the cancer studies launched first by the team.

About a month ago, researchers successfully killed off multiple tumors in test tubes in less than 24 hours by removing life force factors that the cancer depended on for survival.

“The theory was that if the team could trap or remove that factor that is causing the cancerous cells to grow and proliferate, then perhaps that alone would be a mechanism to deprive cancerous cells – causing them to die,” said Robert Kirken, Ph.D., dean of UTEP’s College of Science, who is overseeing the joint research projects.

Georgialina Rodriguez, Ph.D., a postdoctoral fellow at UTEP who was involved in designing, overseeing and carrying out experiments on leukemia cells, said, “We grew tumors in cell lines and identified those specific growth factors that the cancer cells were highly dependent on. We were then able to neutralize [or remove] those factors, and the cancer quickly died because it relied on them so heavily.”

The study quickly progressed to see if the technique would work in mice with breast cancer, and again, the results were outstandingly successful.

“We had a group of mice treated with chemotherapy to compare the success of our methodology, which was able to cause the cancer to completely disappear,” Hartman said. “It was incredible. We literally were able to eliminate the life force of cancer.”

Rodriguez said she hopes the technique will cause fewer side effects and be more effective.

“The thing about chemo and radiation is that they are not very specific – (with our method) we are targeting very specific growth factors,” she said.

Cancer treatments like chemotherapy and radiation fight cancer, but at a tremendous loss to the patient – damaging not only the cancerous cells, but the body’s healthy cells as well.

But, if Premier’s technology continues to be successful, the new technique will completely avoid toxic chemical exposure in patients.

In fact, many medications for other diseases could potentially be eliminated as well.

Standard medical treatment works by adding substances to the body to inhibit disease-related processes – resulting in undesired side effects. However, if Premier is successful in targeting and eliminating the exact cause of a particular disease, patients will no longer need medication because they will no longer have the disease at all.

“The first nine or ten months of our partnership have really been about trying to make inroads in key areas – seeing what will work, testing it rigorously and developing it further,” Kirken said. “For instance, Alzheimer’s is a very complicated model and trying to determine how to eliminate certain factors in the disease is very challenging. I believe it’s going to take a variety of angles to make inroads there.”

However, for traumatic brain injury (TBI) – a disorder that leaves patients with post-traumatic stress disorder, recurring headaches and depression, and sometimes leads to suicide – UTEP researchers have already achieved promising results in their preliminary studies.

By using Premier Biomedical’s same patent-pending concept, a team was able to isolate the molecular compounds in cerebral spinal fluid that are linked to suicidal depression and caused by TBI – if those specific compounds can be removed, patients will no longer suffer from symptoms.

“The University has helped us complete a number of very successful experiments,” Hartman said. “And because of that, the U.S. Army has become convinced that we are far enough ahead in our laboratory research to join us.”

Indeed, after seeing the promise that the methodology holds, the U.S. Army – which is particularly interested in solving TBI for military personnel who have been injured by improvised explosive devices – officially teamed up with UTEP and Premier Biomedical in June. A ceremony to celebrate the historic triad alignment of private enterprise (Premier Biomedical, Inc.), academia (UTEP), and the Department of Defense (D.O.D.) will be held at the Paso del Norte Health Foundation at 11:30 a.m. on July 10, 2013.

After laboratory testing is completed, the plan is for William Beaumont Army Medical Center (WBAMC) to carry out clinical trials.

Because of these partnerships, Premier Biomedical has decided to relocate its headquarters to El Paso.

Hartman believes that clinical trials could begin as early as 2014.

The Felder Doctrine was invented by Mitchell Felder, M.D., a physician in the Department of Neurology at WBAMC and the chairman of the board of directors at Premier Biomedical.