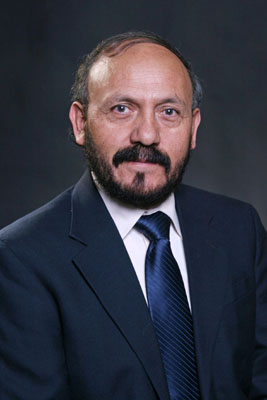 Tiny particles in the air we breathe caused by pollutants such as traffic, power plants and wildfires can lead to major heart trouble.

According to the American Heart Association, pollution is believed to have inflammatory effects on the heart, which can lead to chronic cardiovascular problems.

While studies linking air pollution and heart disease in adults have been conducted in the United States, researchers have not studied its impact on children until now.

In December, Rodrigo X. Armijos, M.D., Sc.D., associate professor of public health sciences at The University of Texas at El Paso, was awarded a $1.04 million RO1 grant from the National Institutes of Health to investigate the adverse effects of air pollution on the cardiovascular health of children.

Armijos said his is the first study to examine this problem in young children in the United States.

“Cardiovascular disease kills more people than all different types of cancers together and is the cause of other major health problems,” said Armijos, the project’s principal investigator. “It is worse in people who are already sick, such as persons with diabetes. If they are exposed to air pollution, that makes it even worse because it can aggravate or increase problems with cardiovascular disease.

“We need to take steps to prevent cardiovascular disease early in at-risk persons and groups. If we don’t, by the time children grow up and reach their 30s and 40s, they’re at risk of having a heart attack or stroke. They’re going to have a lot of health problems and at that point it’s already too late.”

The Centers for Disease Control and Prevention estimate that about 600,000 people die of heart disease in the United States every year, making it the leading cause of death for both men and women.

Armijos will lead an interdisciplinary team of researchers from UTEP and the University of New Mexico.

They will also examine whether systemic inflammation that results from long-term exposure to air pollutants can lead to arterial stiffness and thickness, which are predictors of cardiovascular disease, especially atherosclerosis, or hardening of the arteries.

According to Armijos, when people breathe in air pollutants, particles travel from the lungs to the arteries, resulting in inflammation. The problem can be further complicated if other pro-inflammatory factors are involved such as obesity, a high fat diet and a sedentary lifestyle. He believes that by incorporating anti-inflammatory factors, such as a diet rich in antioxidants, the effect of pollution on cardiovascular health can be potentially mitigated.

Campen, whose research focuses on understanding the biological reasons for the cardiovascular effects of inhaled substances, said these studies will help researchers understand the magnitude of the air pollution effect, along with major risk factors such as diet and physical activity, in driving cardiovascular disease.

His lab has developed new sensitive bioassays to assess the potential for vascular inflammation.

“We typically think of air pollution as being dangerous for the lungs, but research over the past decade suggests that the heart and blood vessels may be even more vulnerable to inhaled toxins,” Campen said. ”(This study) will give us important information as to how early in life this risk begins and whether children are more vulnerable to inflammatory effects of air pollution than adults.”

Weigel participated in the study in Ecuador and believes that the El Paso study is a natural extension of that work. As the co-principal investigator, Weigel helped design the new study and formulate the study protocol and instruments. She will also collect and analyze child nutritional, health and physical activity indicator data, as well as participate in the overall analysis and interpretation of the data.

“We hope to use the findings to highlight the adverse effects of air pollutants on children’s cardiovascular health outcomes and ultimately, provide scientific support for policy changes that will reduce the exposure of children, their families, and the community to noxious air pollutants,” Weigel said.

Armijos said El Paso is the ideal place to conduct this type of study because a lot of people live in highly polluted environments and can’t afford to move to cleaner areas in the city.

“We see people with high blood pressure and cardiovascular disease, and we think it’s because that person has poor eating habits or a sedentary lifestyle, but it’s also our environment that is going to make it even worse,” he said.

Research Focuses on Impact of Airborne Particles on Health, pg. 16-17