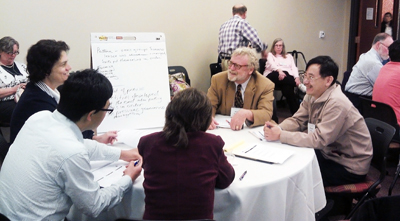 More than 50 UTEP professors gathered to exchange ideas, report on research, and question the ins and outs of working with academic peers outside of their fields during the first-ever Interdisciplinary Research (IDR) Symposium held on campus April 18-19.

Presented by the Office of Research and Sponsored Programs (ORSP), the symposium’s activities were geared toward addressing the benefits and challenges that come up when disciplinary researchers become interdisciplinary teams. Two experts well-versed in team research were brought in to lead interactive workshops and question-and-answer sessions with the aim of overcoming challenges of building collaborations.

The next day included presentations, networking, collaboration and a debriefing.

“We see this as a centerpiece event for the Interdisciplinary Research effort by ORSP,” said Christian Meissner, Ph.D., associate vice president of ORSP. “We’re finding that there are challenges that many of the IDR-funded groups are coming up against, so we’re starting to do more programming as a result of that. This is intended to be the first of many workshops intended to offer assistance to interdisciplinary research teams and provide them the tools to overcome the obstacles to doing great research.”

William Hargrove, Ph.D., director of UTEP’s Center for Environmental Research and Management (CERM), spoke to the importance of collaboration across professional boundaries.

“By nature, environmental problems have to be solved through interdisciplinary work because usually the combination of social factors, economic factors, biophysical factors, and health impact requires it,” he said. “Environment is already integrating sciences like engineering and social sciences, so we’ve had to do it – it’s required. We’ve had to learn how through experience and making mistakes. To me, it’s always interesting and invigorating to learn about other fields, learn about other people’s perspectives, and work together on complex problems. And we have many here on the border.”

“Right now, we really want to get IDR researchers together in one room and say, ‘Look, you all are doing this, so get to know each other,” said Andrea Tirres, interdisciplinary network manager for the ORSP. “And if you’re not an IDR researcher yet, these are the people that are doing things that you want to make connections with.’”

“[Interdisciplinary collaboration] can be tough,” Meissner admitted. “Especially when [researchers] have to talk different languages to one another. Plus, they may have to confront obstacles to their own disciplinary success. How they meet those challenges in the context of the group, how they pull the group together, some of the formal and informal processes that are important for successful groups are what we’re interested in.”

Susan Franzen, director of shared services innovations at The University of Texas at Austin, was invited to campus for the symposium. She led several sessions that focused on developing successful teams and learning to identify behavior that might derail them. Deana Pennington, Ph.D., research assistant professor with the Cyber-ShARE Center of Excellence, also discussed how she has successfully bridged academic relationships through representing research interests in ways that are understandable by someone without the same background.

More symposia and workshops will be scheduled with an open invitation to all UTEP faculty in order to broaden the number and diversity of IDR teams on campus. Mixers, too, are an important part of the plan.

“There’s a social component to getting scholars together,” Meissner said. “Oftentimes it doesn’t happen because I seek out somebody that’s doing research along my lines, but it just happens through natural conversation and casual opportunities to interact. So we’re identifying more of those opportunities around fun topics that are still scholarly.”

To that end, the final session of the symposium was dedicated to brainstorming with attendees and existing IDR teams about what they’d like to see in future programming. As Meissner reiterated, “We’re committed to providing more support and want to see them succeed.”

Another key resource is the funding provided to IDR teams by ORSP, with the next round coming up soon – proposals will be due on July 15 and funding announcements will be made in August. Applications will be made available shortly on the IDR website.

“We struggled with those two and one of the reasons why, I’m convinced, is that we are organized by discipline on campus and we too struggle with work that falls at the intersections of various fields,” she said. “So I’m really cheered by the idea that we are trying very hard to create conditions for those interfaces to become our focus and to work hard at fostering the development of interdisciplinary research at UTEP.

“It’s exciting to know how many people are already engaged in this interdisciplinary effort and are being fostered by these offices on campus. And it’s exciting to see that we’re now at a point where we can talk about projects that were initially incented and are under way that demonstrates to all of us that there is an interdisciplinary potential on the campus. This is something that we could ultimately be very, very proud of. I think we are innovators at UTEP and always have been, and I think this program proves that.”