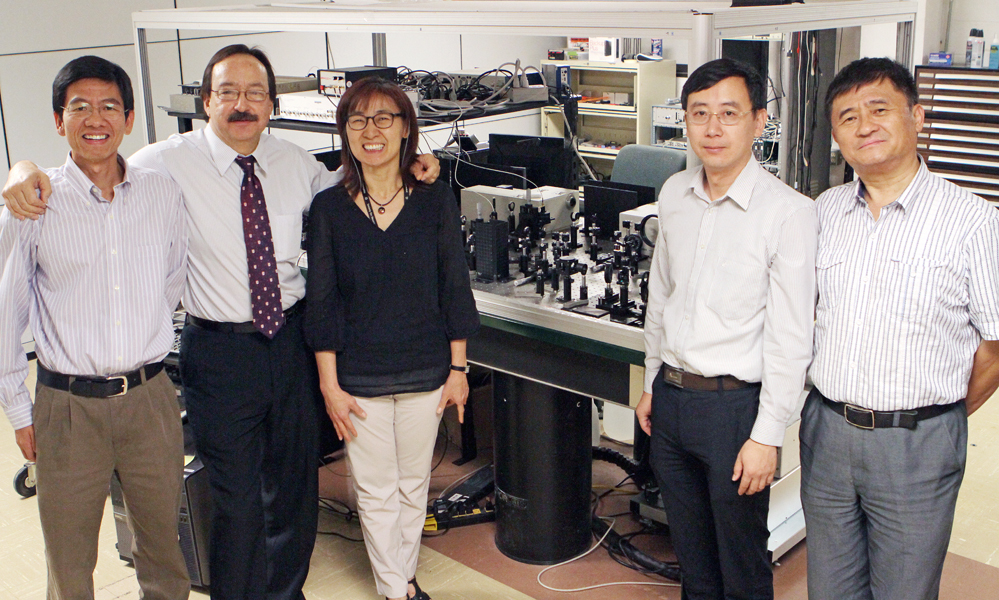 Chuan Xiao, Ph.D., points at his computer screen, drawing attention to a video playing. In it, bright red and green wiggling dots dart back and forth across a pitch-black background.

These “dots” are in the middle of carrying out a natural, everyday process: a virus infecting a host.

In this case, the potential hosts are zooplankton, microorganisms that live in the ocean; they are illuminated in red, while the green dots chasing after them are thought to be marine viruses.

Xiao, a chemist at The University of Texas at El Paso, is trying to understand exactly how the Cafeteria Roenbergensis virus infects zooplankton. “Does the host eat the virus? Or does the virus attach itself to the host?” he asked.

While the answer remains a mystery, he soon hopes to know more with the help of Chunqiang Li, Ph.D., a physicist at UTEP who is developing cutting-edge microscope technology. The microscope should be able to capture the extra-fast infection rate up close, which has been the biggest challenge for Xiao so far.

“Traditional methods are too slow to capture this process,” Xiao said.

Xiao isn’t the only scientist looking to the novel imaging system for research assistance. Li’s technology will have wide applicability, potentially advancing multiple studies, including those of biologists, neuroscientists and biomedical researchers.

The microscope revolves around two significant innovations: high-speed and the ability to capture motion in three dimensions.

“We’re living in a three-dimensional world, but optical microscopes only capture one plane at a time, creating flat images,” Li said, referring to standard optical microscopes that capture cells and their movement in two dimensions: side-to-side, and up and down. “There is a big demand for imaging that can capture all three dimensions.”

Additional imaging techniques are able to capture the third dimension – depth – but the process is extremely tedious. Current procedures include gradually depth scanning an object, which involves placing the object on a movable stand that can move close to and away from the lens. This allows the focus of the camera to steadily change, capturing the various depths and angles of the object. The 3-D object is then recreated, pixel by pixel, on the screen. If the object is moving, like a live cell, the process becomes even more complex.

Using new physics concepts, Li will bypass the slow scanning process and speed up how quickly the images are created. At the same time, with the help of co-principal investigator Wei Qian, Ph.D., professor of electrical and computer engineering, the technology will track molecular and cellular motion, automatically generating high-resolution, 3-D videos of the fast microscopic processes taking place. The end result will look similar to Xiao’s virus video, but in three dimensions.

Two additional UTEP researchers plan to work closely with Li to use the new equipment.

Chemist Jorge Gardea-Torresdey, Ph.D., will use the system for his research on nanoparticles. An expert on how the tiny, engineered particles are seeping into the environment, Gardea-Torresdey is concerned about their potential health risks. His work already has shown that plants are absorbing the particles, but now he plans to learn how they move through soil and interact with minerals.

Gardea-Torresdey currently has to stain nanoparticles with dyes in order to see them under the microscope, but Li’s technology should be able to visualize them without the added step.

“For me, this is going to be incredibly useful. It’s going to be simpler, faster and more convenient,” Gardea-Torresdey said.

She studies fruit flies in hopes of better understanding the human brain. Han is specifically interested in visualizing neurotransmission, or how neurons in the brain talk to each other, passing along valuable information. These signals are incredibly quick, occurring in milliseconds, but the microscope should catch and record them, allowing her to see a 3-D model of neurotransmission occurring in the brain of live fruit flies.

“This is a really cool idea,” she said. “We currently view individual neurons, focusing on one at a time, but this will let us see everything that’s happening all at once.”

Li expects to have the microscope — which is funded by a $650,000 grant from the National Science Foundation and $350,000 matching funds from UTEP — assembled in two years. Co-principal investigators Xiao, Gardea-Torresdey and Han will then be able to tinker with it, providing feedback on its capabilities and using it for their own work.

“The beauty of this project is that it’s interdisciplinary,” Han said. “With the outside expertise of biologists and chemists – some of the people who will use and benefit from this technology – Li will be able to build a practical device.”