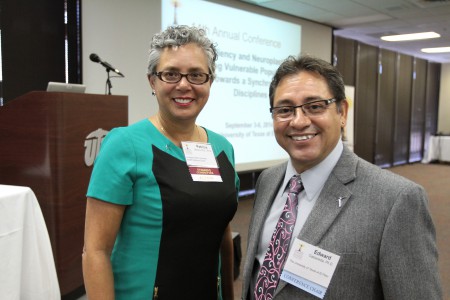 A group of more than 100 scholars convened at UTEP Sept. 3-6 to examine the human capacity to recover from adversity for the 14th annual National Hispanic Science Network (NHSN) international conference.

UTEP Associate Professor of Psychology Laura O’Dell, Ph.D., who served on the planning committee, was excited to have such diverse and strong researchers come to El Paso.

“It is the first time that this conference was on a university campus in a border city,” O’Dell said. “This is important given that the focus of the meeting is on Hispanic drug use, which is a problem that plagues our border community.”

Leading scholars from the U.S. and Mexico, including UTEP faculty and students, presented on topics related to the physical and mental health of Hispanics.

Molina recognized Castañeda and his conference co-chair Sergio Aguilar-Gaxiola, M.D., Ph.D., professor of internal medicine at the University of California, Davis School of Medicine, and lauded UTEP for its hosting capacity.

“It made a lot of sense that the conference should take place in the El Paso/Juárez community,” Castañeda said. “We were able showcase our student population, our campus and the El Paso community to investigators that find our region directly relevant to their research.”

UTEP Professor and head of health psychology Felipe González Castro, Ph.D., believed this was the first NHSN conference featuring Mexican research investigators and scholars from Juárez, who then provided their perspectives on violence, drug abuse, and other psychosocial and community issues occurring there.

UTEP students benefitted thanks to early career mentoring and networking events where students had intimate discussions with professionals in the field and connected with potential mentors.

“Having it here on campus allowed more of our undergraduate and graduate students to attend and present their work, thus giving to some of them an early experience in contributing to a national conference,” said González Castro.

Many attendees expressed their excitement over being able to interact with leading Hispanic scholars in the field of drug abuse. They were also impressed by the research capacity and presentation skills demonstrated by students both from UTEP and institutions such as Escuela Nacional de Antropología e Historia in Mexico City.

Most rewarding for O’Dell was a panel she organized on adolescent drug use, which featured prominent researchers from UCLA, Florida State, The University of Texas at Dallas and The University of California, San Bernadino. Panelists discussed exposure to drugs of abuse during the critical period of adolescent development with an overall goal of identifying the long-term consequences of early exposure to drugs of abuse, revealing the interdisciplinary nature of the issue.

It was also fulfilling for O’Dell to be able to show colleagues firsthand the laboratories in which she, her peers and her students are conducting their research.

“I was pleased with their positive response,” she said. “One colleague from UCLA commented on the spacious and convenient facilities that she noted were perfect for conducting research in our area. She also said that she would encourage her students to consider UTEP for summer programs and graduate training. The conference created this opportunity for me to recruit future students to UTEP.”

Two members of O’Dell’s laboratory also presented: Luis Carcoba, M.D., Ph.D., spoke about his work related to the contribution of stress to women’s tobacco use, while doctoral student Joseph Pipkin presented the rewarding effects of tobacco in diabetic subjects.

Administrators and staff from local social advocacy agencies were encouraged to attend the conference in order to learn about the broad range of research being done both nationally and internationally that could then be applied to their community-based work.

Government research entities had a presence via attendees from The National Institute on Alcohol Abuse and Alcoholism, NIDA and NIH.

O’Dell believes that the benefits to hosting this conference will resonate far into the future.

“As UTEP works its way to Tier One research status, these events are critical for us to put UTEP on the stage for other researchers to see,” she said. “Others around the country get to see what amazing facilities and opportunities exist here. Then they leave with a better sense that we are ready to play on the national research stage and that we have what it takes to be recognized nationally for our research endeavors.”