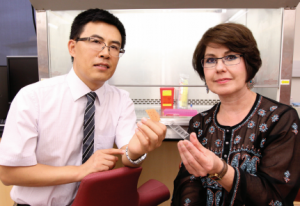 A low-cost tool for diagnosing whooping cough in low-resource settings is on the horizon at The University of Texas at El Paso.

Whooping cough is an infectious disease caused by the Bordetella pertussis bacteria. Once believed to be eradicated in the United States, the highly contagious respiratory infection is making a comeback.

In September, the Texas Department of State Health Services issued a Pertussis Health Alert, which indicated that 1,935 pertussis cases were reported as of August, a disturbing statistic that showed the state was on track to surpass its 50-year record of 3,358 cases in 2009.

“Whooping cough is hard to diagnose because people think it’s just a cough or some type of allergy and they don’t seek medical attention,” Domínguez said.

Pertussis mimics symptoms of the common cold: runny nose, sneezing, mild cough, fever and fatigue. After two weeks, symptoms worsen, resulting in a hacking cough that sounds like a “whoop” when a person gasps for air.

In 2012, more than 41,000 cases of whooping cough were reported in the United States; the highest number in 60 years.

“The incredible thing is that we have a vaccine, but the organism is still circulating,” Domínguez said.

Early diagnosis can make the infection less severe and prevent it from spreading.

Using chromatography paper, Li has developed a three-dimensional, paper-based microfluidic device that uses DNA amplification to provide a rapid, low-cost and highly sensitive method to diagnose whooping cough. The procedure involves placing a sample from a nasal swab in a device similar to a pregnancy test strip that will change color to indicate the presence of the bacteria. Results are available in 40 minutes.

“It’s affordable, portable and has lots of advantages,” Domínguez said, referring to the biochip. “For example, if a student is coughing in school, they go to the nurse, who can swab a sample (from inside) the nose, put it in a small tube containing saline, swirl it several times and then transfer a couple of drops into the device. If positive, a color change will indicate the presence of bacteria.”

It is similar to a device Li developed with a grant from the National Institute of General Medical Sciences to detect meningitis.

“This device can have a wide range of applications, because (with) many pathogens, we know their DNA sequence already,” said Li, who conducted postdoctoral work on microfluidics at Harvard University and the University of California, Berkeley. “So once we know their DNA sequence, we can modify the DNA code or slightly modify the device to create a wider use for it to detect infectious diseases or foodborne pathogens.”

While Li’s role was to design the chip, he needed to collaborate with Dominguez, a microbiology expert, to determine the chip’s effectiveness.

Once the chip is out of the design phase, Domínguez will validate its effectiveness by using it to test positive and negative clinical samples from patients. In June, Domínguez and Li were awarded a $5,000 grant from the American Society for Clinical Laboratory Science (ASCLS). The funds were used to initiate the construction of the device and to obtain clinical samples.

Both researchers agree that the device is ideal for use in developing countries where access to expensive equipment is limited or nonexistent.

Figures from the Centers for Disease Control and Prevention estimate that there are 30 million to 50 million pertussis cases worldwide and about 300,000 deaths each year related to the disease. Ninety percent of cases occur in the developing world, with the highest infection rate among children in countries where vaccination coverage is low.

Li estimates that the material cost to produce the chip is only a few cents. The device also eliminates the need for expensive equipment to perform diagnostic procedures, such as real-time PCR, a technology that costs about $45,000.

Instead, Li is applying the loop mediated isothermal amplification (LAMP) technique, a new DNA amplification technique, on the chip using a $100 battery-powered portable heater that his group recently designed. The innovation not only eliminates the need for expensive real-time PCR equipment to diagnose infectious diseases, but also creates the capability to do on-site disease diagnosis.

“Those locations may not have the money for equipment and labs, or trained personnel to carry out the procedures. They may not even have electricity. So the question is, how can we solve this issue?” Li said.

For undergraduate and graduate students, the project also provides an opportunity to participate in hands-on research involving different disciplines. Maowei Dou, a doctoral chemistry student, is assisting Li with the biochip.

Renee Enriquez, a senior in the clinical laboratory sciences program, is a volunteer in Domínguez’s lab. She is applying the molecular techniques she’s learned in class to inoculate cultures and extract DNA from bacteria. She is also learning the LAMP technique from Li.

“The device is going to be better for more impoverished areas because you don’t need to have all this equipment,” said Enriquez, who hopes to attend medical school. “It’s just on one little chip. You run it, you see if there’s a color change. Any person could do it.”

Li’s interest in bioanalysis was piqued when he was studying antioxidant properties of common herbs and vegetables as an undergraduate student at Qingdao University in China. He has been working on chip design for the past 10 years and sees it as an opportunity to do something that could be beneficial to the biomedical field, he said.

For Domínguez, working with Li has opened up a panorama of knowledge that has led to new advances in their research agendas.

“If it were just me by myself, I would never be able to accomplish this,” Dominguez said. “Collaboration will empower you because two brains are better than one.”