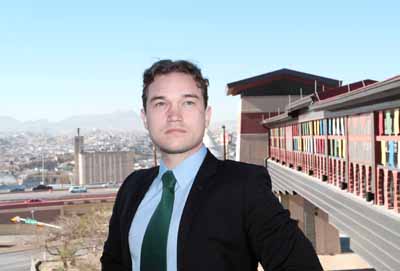 A research center created to study how divergent municipal, state and national governments can work together to enhance the Paso del Norte region will be inaugurated April 29 at The University of Texas at El Paso.

More than 200 invited guests with interests including health care, education, business, urban planning and economic development are expected to attend the inaugural event organized by the new Hunt Institute for Global Competitiveness.

The event will familiarize the region’s leaders with the institute’s mission. That mission is to develop economic frameworks to analyze the institutional and regulatory structures that influence the quality of life of millions of people in the Paso del Norte region.

Patrick Schaefer, the institute’s executive director, said the center will study the data to see how these issues impact the competitiveness of communities in West Texas, southern New Mexico and northern Chihuahua, Mexico.

“The stakeholders’ input will be critical for our institute’s research so that it can be both practical and relevant in responding to the needs of this trans-boundary community,” Schaefer said. “Through our research we hope to find opportunities to create the kinds of efficiencies that will lead to better economic conditions and thereby better communities.”

Schaefer, a multilingual and multi-degreed attorney with a grounded understanding of comparative economic, political and legal systems of the U.S. and Latin America, said he plans to discuss the types and levels of institutional economic research he expects from the institute.

“We’re going to be breaking ground in economics research because these kinds of analyses, while common at the macro level, are not really done at the local, trans-boundary level on a sustained basis,” Schaefer said. He added that he hopes the work reaches beyond state capitals to the federal level in Washington, D.C., and Mexico City.

He will be the master of ceremonies at the event that will include opening remarks from UTEP President Diana Natalicio and Woody Hunt, El Paso businessman and philanthropist. The Hunt Family Foundation donated $4 million to UTEP in 2010 to develop the research center. Participants also will hear from several regional experts during a panel discussion.

The keynote speaker will be Edward Feser, Ph.D., dean of the College of Fine and Applied Arts and professor of urban and regional planning, and agricultural and consumer economics at the University of Illinois at Urbana-Champaign. He has done economic development work for entities within the Paso del Norte region.

Feser said he will emphasize the important role of universities as resources for ideas, research and policy recommendations in regional economic development. They serve as conduits where leading scholars from multiple disciplines can unite with citizens, elected officials and policy experts to explore critical issues that shape the region’s growth and the quality of life of its residents.

“Economic development and competitiveness are long-run games,” Feser said. “Any policy initiatives, plans and investments to support them stand the best chance of success if they are sustained over an extended period, evaluated periodically for effectiveness and adjusted as conditions change. To have a unit in the University that can offer the Paso del Norte region the kind of expertise and analysis that will enable sustained, reflective policy action is a tremendous asset.”

Michael Kelly, Ph.D., chief program officer with the Paso del Norte Health Foundation, echoed Feser’s sentiments. He said people involved in the region’s development need to look past what is happening to understand why it is happening.

“That’s how we will reach our full potential, and that potential is tremendous,” said Kelly, who will discuss disparities in school nutrition as an event panelist. He called nutrition a fundamental building block of health. “We can learn internally, but it also is important for us to look globally.”