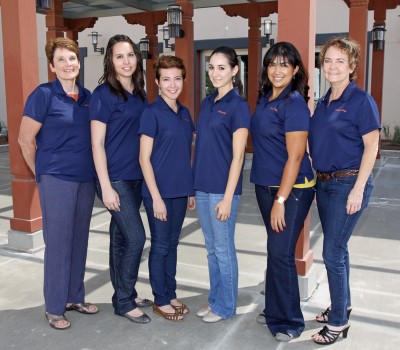 Four undergraduate research assistants under the direction of primary investigators Kris Robinson, Ph.D., associate professor and assistant dean for graduate nursing, and Diane Monsivais, Ph.D., assistant professor, are testing a psycho-educational intervention in Hispanic cancer patients in the community who have pain.

The project is made possible by a $419,147 grant from the Academic Research Enhancement Awards (AREA) that the School of Nursing received in 2010. The National Institutes of Health established the awards to stimulate research at educational institutions that provide baccalaureate training for a significant number of the nation’s research scientists but that have not been major recipients of NIH support.

“What is really great about this grant is that its focus is on minority students learning to become researchers,” Robinson said. “We have four undergraduate students whose goals are to pursue further graduate education and work in research. I think we’ve done our job.”

As part of the study, research assistants Vanessa Avelar Lezama, Thalia Duarte, Paloma Flores and Christina Perez interview participants in their homes about their pain. They then discuss pain management and set goals for participants to control their pain. The goal to improve communication about pain management between cancer patients and their health care providers.

“What we are trying to do is to have people know what they can do to control their pain. You don’t have to be afraid,” said Avelar Lezama, the team’s coordinator.

Guided by Robinson and Monsivais, Avelar Lezama and Perez looked at what was needed as a research team to make the study successful. They developed the team’s core values, which include open communication and honesty. They also wrote the job description and interviewed prospective research assistants in Spanish to make sure they were 100 percent bilingual. Above all, they developed a baseline for having a successful interaction with participants by being patient, allowing participants to take their time answering questions and making them feel comfortable.

The team also is responsible for recruiting Spanish-speaking volunteers who have cancer and pain to participate in the study.

The interventions are recorded and the research assistants transcribe the recordings and look for patterns.

“They are researchers on this grant; they are not just the assistants,” Robinson said.

Robinson and Monsivais have developed a culture of positive support, similar to the support they received when they first wrote their grant proposal three years ago.

The researchers had contacted Sandra Ward, Ph.D., the Helen Denne Schulte professor at the University of Wisconsin Madison, for guidance on writing their grant.

Ward began working on pain management research about 15 years ago. She documented the extent to which pain is a problem for individuals and the attitude barriers that patients have to achieving optimal pain relief. She then turned to studying patient interventions that might help overcome those problems.

“I was seriously interested in doing intervention research, where we say, ‘OK, there’s a problem, here’s a potential solution,’” Ward said. “Here’s a way of doing patient education that might be successful in helping people have better outcomes, less pain, and a better quality of life.”

Ward developed RidCancerPain, an intervention that she found decreased pain in cancer patients.

She was interested in testing the intervention beyond the population in Madison, when she was contacted out of the blue by Robinson and Monsivais, who wanted to replicate her study along the U.S.-Mexico border.

“I said, ‘OK. If you want to do the work, I’ll mentor you’ and we started writing a grant application,” Ward said.

The researchers communicated via conference call every week, from developing the ideas for the grant to writing and editing the proposal.

“It was like having a class,” Monsivais said.” She’d say, ‘You need to focus this part a little differently’ and then we’d go back and do the work and send it back, then she’d shift it to the needs of that particular grant, which is something we were learning.”

The group finished writing the grant in record time. They started on May 31, 2009 and were finished by Sept. 23 that year. According to Robinson, she and Monsivais were the first NIH recipients at UTEP that were dual primary investigators on a grant.

“I really have been very invested in cancer pain management and wanted to see the work I had done be extended to populations beyond those available to me in Madison, Wis.,” Ward said. “The opportunity for me to do the border dwelling Hispanic population was just a gift because I never would have had that in Wisconsin.”

Ward, who has written several grants and mentored countless students throughout her career, sees mentoring as an important part of being a faculty member, especially by helping those who are starting their research careers.

“The thing that I have liked the most and that I think has been the most valuable in my career has been the opportunity to bring the next generation along,” Ward said.

Robinson and Monsivais are attempting to move the next generation of UTEP researchers along too.

Perez, a psychology major, has applied to the Master of Social Work program at UTEP. She also hopes to study bilingual research.

“I don’t think there’s enough research for that and I am bilingual. So I know what is right and what is wrong,” Perez said.