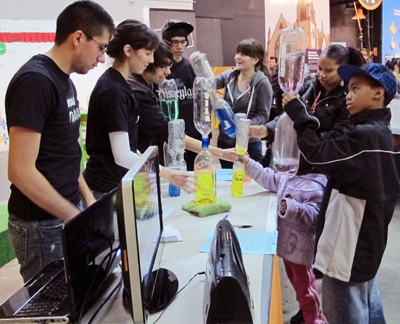 Joining the “circus” could help stem the tide of science teachers who decide to leave the profession within five years of their first teaching job, according to a UTEP researcher from the University’s College of Education.

Pei-Ling Hsu, Ph.D., assistant professor of teacher education, began in 2012 to document ways to enhance the confidence, abilities and professional identities of science teachers through her “Science Circus” program that involves the development of lesson plans and teaching in informal settings.

During the 2011-12 academic year, Hsu’s students participated in five “circus” events at the Insights El Paso Science Center in downtown El Paso and the University’s Centennial Museum and Chihuahuan Desert Gardens. They created handouts and made presentations that fit with the museums’ missions and the state’s curriculum standards. The students also organized a similar event at the Esperanza Acosta Moreno Library branch in Far East El Paso.

Hsu said part of the reason behind her research was a 2003 paper by the Center for the Study of Teaching and Policy at the University of Washington that showed 46 percent of beginning teachers left education after five years. The majority were in the fields of math (16.4 percent), science (15.6 percent) and special education (14.5 percent). Her concern was that the science teachers lacked a solid foundation in teaching. Other issues such as extensive paperwork, student discipline problems, and difficult parents and administrators could exasperate their lack of confidence.

Her goal with the “Science Circus” is to provide pre-service teachers with an opportunity to build confidence by “teaching” in settings such as museums, libraries and summer camps. She has scheduled four Science Circus events during the fall semester. The two-hour events start at 10 a.m. and 2 p.m. Oct. 27 and Dec. 1 in UTEP’s Centennial Museum.

“This is real teaching in a real situation with real feedback,” Hsu said. “Knowledge of science content is just one part. You must be prepared (with content), but you also must be prepared to be spontaneous.”

Maritza Schlak, a senior interdisciplinary studies major, was part of two circus experiences. While initially anxious about the process, she said it was an opportunity for personal and professional growth.

Schlak, a student teacher in the Canutillo Independent School District this semester, said her first circus was at Insights and involved physics. The subsequent event was at the Centennial Museum and involved fossils and was more fun, she said. Her team set up a scavenger hunt and a table with modeling clay where visitors could create their own fossils.

“The first one was a lot of work and made me nervous. Frankly, I was overwhelmed. I was more efficient the second time – and more confident,” said Schlak, a native of Venezuela who had taught preschool previously in St. Louis.

These pre-service teachers were interviewed before and after their presentations to gauge their level of comfort and confidence in teaching. Preliminary data showed the experience was helpful.

Scott Cutler, curator at the Centennial Museum, helped familiarize the UTEP students with the museum and its mission. He praised their presentations for how they engaged their audiences with information in a non-threatening way.

“They had some neat ideas,” he said as he mentioned the use of food, crafts and bowling to engage children and adult audiences. “They used simple teaching concepts to convey the big picture of science. I think the (young museum visitors) got a lot out of it. I saw a lot of interaction.”

Hsu said she plans to continue to gather and analyze her data this fall and submit a new grant proposal in the spring that will allow her to expand her research into the factors that make up a dedicated and successful science teacher.