Arctic ponds play an important role in Alaska’s northern ecosystem, but a recent study by University of Texas at El Paso researchers calls their future into question.

“Ponds are disappearing and shrinking up north,” said Christian Andresen, Ph.D., a postdoctoral fellow at UTEP. “And my own estimates about their disappearance are very conservative.”

Along with ecologist Vanessa Lougheed, Ph.D., Andresen has studied more than 2,800 Arctic tundra ponds in the northern region of Alaska’s Barrow Peninsula. By analyzing historical photos and satellite images taken between 1948 and 2010, they’ve found that the number of ponds in the region has decreased by about 17 percent, while pond size has shrunk by an average of one-third.

“We suspected that ponds would be smaller due to observations we had made in the past,” said Lougheed, who is an associate professor of biological sciences at UTEP. “What’s unique is that no one has analyzed this as quantitatively as Christian with such high-resolution images and such large amounts of data.”

Lougheed also notes the team’s distinctive approach to capture aerial photos of the region. Instead of flying a small plane or helicopter, Andresen devised a special apparatus from a common toy: a kite. When the kite is airborne, a dangling, but secure, camera captures images of ponds below.

The study, which has been accepted for publication in the Journal of Geophysical Research: Biogeosciences, summarizes years of research completed by the duo in the barren lands of Alaska’s Arctic tundra.

Despite average summer temperatures of about 39 degrees Fahrenheit – and relentless winds that make it feel even colder – Lougheed and Andresen voyage there every summer. Their goal is to learn how climate change is affecting the extremely fragile landscape.

Their observations have been striking. The impact of warming temperatures on ponds is, perhaps, made most apparent by a recent then-and-now photo taken by the team. 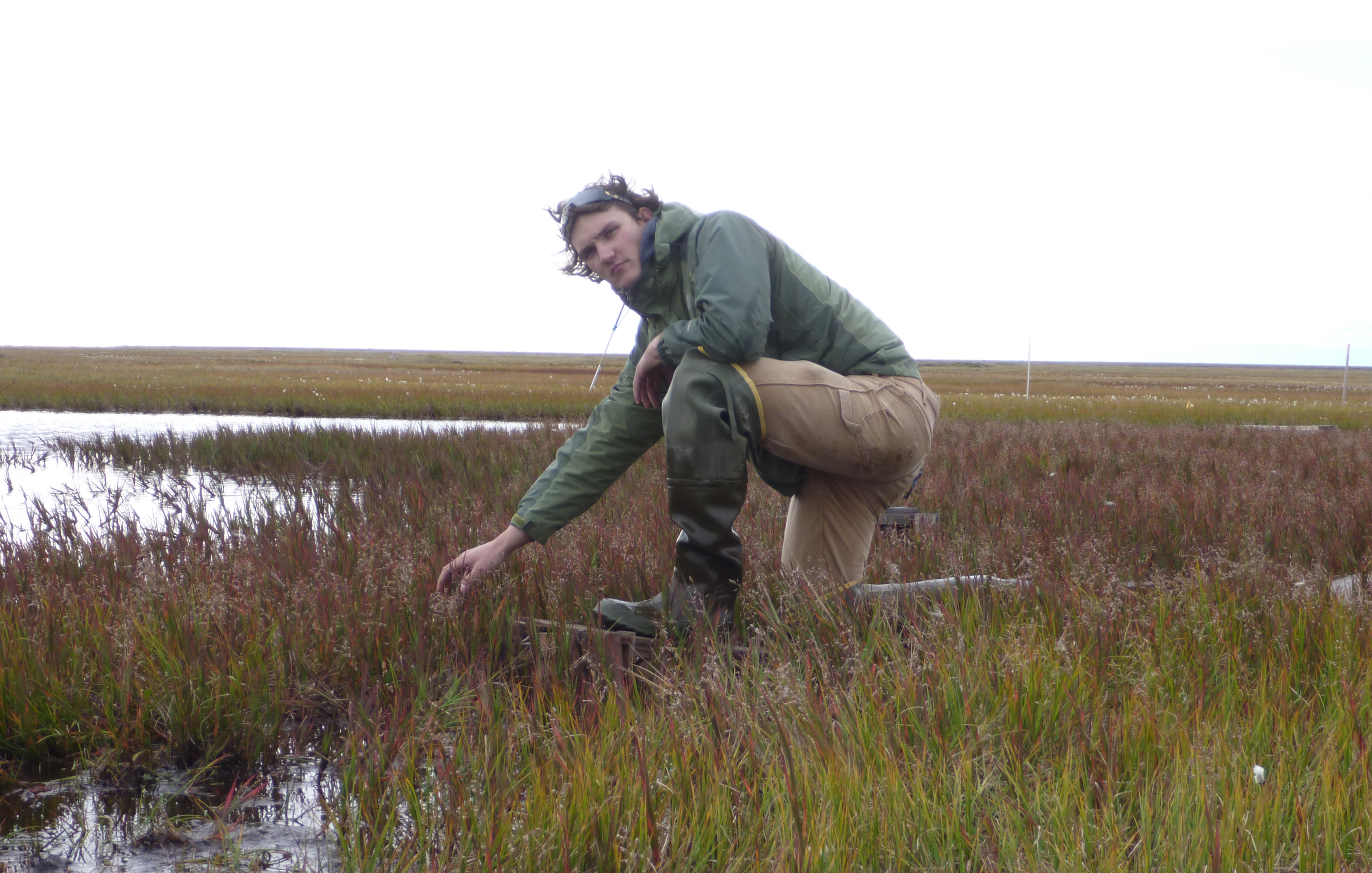 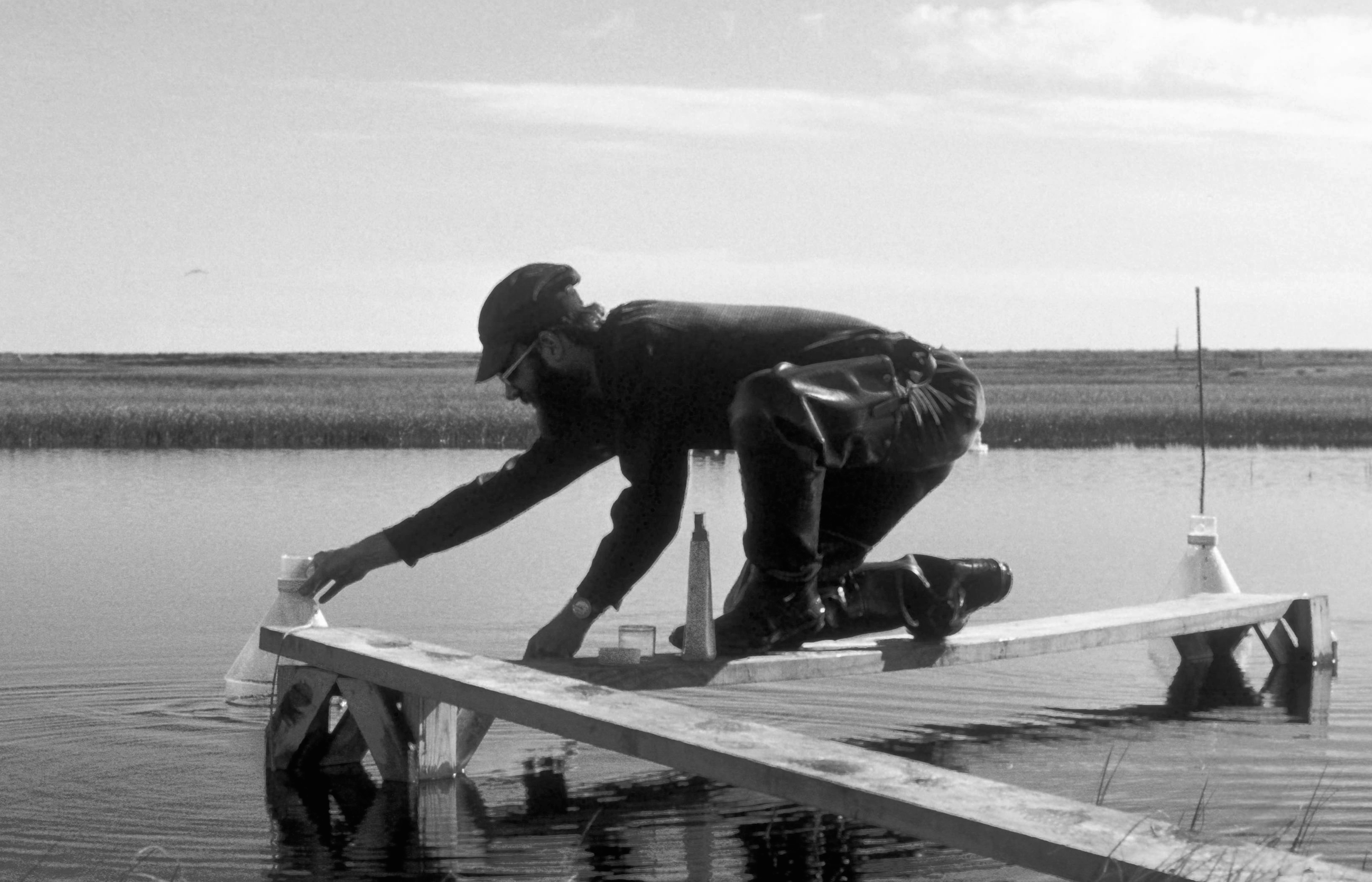 UTEP researchers revisited a pond that North Dakota State University scientist Mac Butler, Ph.D., had studied in the 1970s. A black and white historical photo shows the young Butler sampling the crystal clear waters. Almost 40 years later, Andresen poses in the same location, but the pond is completely changed – it has practically disappeared due to plant growth.

“Plants are taking over shallow ponds because they’re becoming warm and nutrient-rich,” said Andresen who holds a doctorate in environmental science and engineering from UTEP. “Before you know it, boom, the pond is gone.”

The team points to climate change as the culprit.

Warming temperatures cause nutrient-rich permafrost – a frozen layer of soil – to thaw. The nutrients wind up in ponds, which plants flock to for enhanced growth. As plants move in, the pond begins to vanish.

Andresen worries that the geomorphology of the region’s landscape will change if these small bodies of water continue to shrink.

“The role of ponds in the arctic is extremely important,” he said. “History tells us that ponds tend to enlarge over hundreds of years and eventually become lakes; ponds shape much of this landscape in the long run, and with no ponds there will be no lakes for this region.”

The ponds also serve as a major food source and nesting habitat for migratory birds, including certain waterfowl on the threatened species list, such as the spectacled eider (Somateria fischeri) and Steller’s eider (Polysticta stelleri). If the aquatic system continues to shift toward a drier community, their vital summer feeding and nesting grounds could disappear.

Lougheed and Andresen plan to continue studying the ponds to see what other implications their size reduction will have.

“We know that the Arctic is getting warmer and now we know that ponds are getting smaller,” Lougheed said. “The next thing is to learn if this has implications for greenhouse gas emissions.”