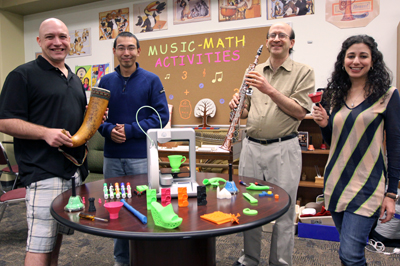 A trio of 3-D printers hums along to a steady electro beat inside UTEP’s cavernous Educational Technology Research Laboratory. The machines are part of a multimedia concept that Daniel Tillman, Ph.D., expects his students to use to motivate their future pupils to learn about music, math and technology.

Tillman, who started at the University in the fall, was excited about this interdisciplinary research that would create its own academic “circle of life.” He energetically talked about his work in the lecture hall-sized lab that includes a designated MAC (Math Activity Corner) on the second floor of the Education Building.

He will work with several UTEP colleagues this spring to create a music-math camp in July 2013 that will involve 20 current and future elementary school teachers and about 15 upper elementary students from El Paso and Juárez. It will be funded through a $20,000 grant from the University’s Interdisciplinary Research Fund.

Among the program’s goals are to improve teachers’ pedagogical knowledge of math so they can make it more meaningful and memorable to students, determine the impact of math lessons that incorporate music composition and musical instrument design on student success, and see how 3-D printers could be used to integrate STEM (science, technology, engineering and mathematics) with non-STEM fields such as music, entrepreneurship, and ecology to promote math education.

While the idea of mixing math and music is not new, the scope and technology of this project is. Tillman plans to use music as a nonthreatening introduction to math concepts that will help students design simple musical instruments on computers. That information will be fed into a 3-D printer to create the instruments that they can play during a taped performance in the lab’s music studio.

“It’s a multimedia production that is tied to math the way spelling is tied to literature,” said Tillman, an assistant professor of educational technology. He wants to engage the students on different levels and help them to think in broad terms. “Gaining knowledge and skills, and embracing ideas – this is what a university is about. This is what the 21st century is about.”

Lesser has taught math for 25 years – nine of those at UTEP – and has a history of combining math and music. The professor is recognized for his work in the classroom and as a songwriter, and he is excited about this opportunity.

“I always enjoy those unexpected synergies that happen when different disciplines come together,” he said. “This grant on music, math and technology has the potential to expand frontiers on many levels and lead to much bigger fundable projects.”

As part of the research, the University is collaborating with the Navajo Technical College in Crownpoint, N.M., about 100 miles northeast of Albuquerque. UTEP loaned the college a 3-D printer that it could use in Navajo K-12 schools to build a 3-D movement among underserved, minority populations. If successful, Tillman plans to introduce a similar program across the border in Juárez.

The printers use spools of plastic line similar to the type used in weed trimmers. The line is fed into a heating unit on the top of the printer that melts the line to form the object that was “copied.” While whistles can be made in less than 20 minutes, flutes take about four hours.

“These machines will revolutionize the 21st century the way the assembly line transformed the 19th century,” Tillman said. “The pendulum will swing from how much an individual can acquire to how much a person can produce.”

He said his research builds on the University’s engineering history and taps into its cutting-edge present, such as the research being done at UTEP’s world-class W.M. Keck Center for 3-D Innovation.

Eric MacDonald, Ph.D., associate professor of electrical and computer engineering and the center’s associate director, said Tillman’s research can capture the imagination of today’s youth and inspire them to become tomorrow’s engineering students.

“I see this as a long-term investment,” said MacDonald, who planned to invite Tillman’s summer cohort to the Keck Center. He called the center the best-equipped additive manufacturing lab in the world. “(Tillman’s) at one end of the pipe and I’m at the other.”

Josefina V. “Josie” Tinajero, Ed.D., dean of The University of Texas at El Paso’s College of Education, is excited about the possible academic impact the team’s research could have on future generations. She said she hoped the program’s scope would eventually include other specialties such as languages and biliteracy.

“We are creating the rich research infrastructure that I always had envisioned at our college,” Tinajero said. “This lab takes our efforts to the next level of sophistication. It’s the most innovative lab in the college due in large part to the expertise of Daniel Tillman.”

The new professor and lab director earned his doctorate in instructional technology from the University of Virginia in 2012. During his doctoral studies, he was a graduate fellow in the Curry School of Education’s Center for Technology and Teacher Education and worked as office manager for the Dynamic Media Research Laboratory. For about eight years prior, he directed and edited documentary films, mostly about aviation.

“This is a very exciting time to be in education,” he said with a grin. “(3-D printing) is going to change society.”