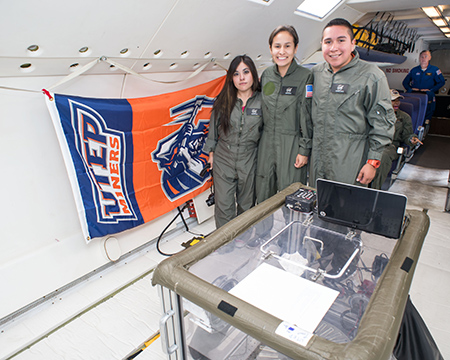 The students visited Ellington Field at NASA’s Johnson Space Center in Houston to conduct tests aboard a reduced-gravity aircraft.

The collaboration was the result of the hard work and commitment of team members Sergio Cordova, Miriam Paez, Gabriel Garay, Edgardo Flores and Sara Soto.

“Never have I felt anything close to what I felt on the plane,” said Soto, a sophomore mechanical engineering major. “It felt almost like a roller coaster, but one that never came down.”

Evgeny Shafirovich, Ph.D, an assistant professor of mechanical engineering at UTEP, served as the team’s faculty adviser. Before coming to UTEP, Shafirovich conducted research at the Russian Academy of Sciences and the CNRS National Center for Scientific Research in France. He also worked at Purdue University. His experiences guided the students throughout the entire process.

“UTEP is competitive with major research universities,” Shafirovich said, praising the University’s research agenda. “We have participated not only in programs for minority-serving institutions, but also in (NASA’s) broader programs where we successfully competed with students from top universities.”

In order to compete for this opportunity, the group submitted a proposal to NASA’s Reduced Gravity Education Flight Program (RGEFP) that discussed everything from materials and procedures to outreach presentations at local schools.

“We wrote a proposal to NASA’s RGEFP with a research topic that is related to NASA Strategic Knowledge Gaps associated with future human destinations,” said Sergio Cordova, a senior mechanical engineering major and the group’s student leader. “When we got selected, we built the experiment and we did a hazard, structural and electrical analysis in a period of six months.”

Their tests will help determine the effectiveness of a lunar dust-cleaning device that takes advantage of the magnetic properties of moon soil.

“We are excited that our program provides once-in-a-lifetime opportunities for aspiring scientists and engineers to study and understand their craft,” said Frank Prochaska, RGEFP manager. “The students gain real-world skills by participating in the program through collaborative planning and teamwork.”

The UTEP team arrived at Ellington Field on Tuesday, July 8. Among the many labs they visited before testing their proposal on the reduced-gravity aircraft, the one the group enjoyed the most was NASA’s Neutral Buoyancy Lab, which has a 40-foot deep pool for spacewalk training. The pool contains replica sections of the International Space Station, Cordova said.

The special visit and interactions with the NASA facilities and its staff made a strong impact on the team.

“The most unexpected part for me was having a great mentor,” said Edgardo Flores, a senior engineering major. “I was aware that we were assigned a mentor but I didn’t know he was going to be that awesome. He helped us to expand our network and he contacted other engineers for us so we can meet and talk to them about their careers with NASA.”

The University’s team and their NASA guides performed their experiments on board a microgravity aircraft that creates periods of weightlessness for up to 25 seconds at a time by executing a series of approximately 30 roller coaster-like parabolas over the Gulf of Mexico.

The students used these periods of free-falls to collect data inside the aircraft’s unique environment that simulates the zero-gravity environment found in outer space.

“My favorite part of the trip was having the opportunity to work with such intelligent people who enjoy the same sciences as I do,” said Gabriel Garay, a sophomore engineering major. “I had the privilege of meeting astronauts, pilots, engineers and other NASA personnel that all influenced me to continue my interest in becoming a mechanical engineer.”

As the trip neared its end, the students reflected on its significance for the University.

“This trip made me realize that UTEP has so much to offer, there are many opportunities out there and you just have to apply and put yourself out there to get them,” Soto said. “To be there in Ellington Field, working alongside people from NASA and other schools from all over Texas, was unreal.”

Since 2011, six student teams from UTEP have been selected to participate in NASA’s RGEFP. The chance to participate in this experience was made possible through support of UTEP’s Center for Space Exploration and Technology Research (cSETR), which provided laboratory space and resources for assembling and testing experiments as well as funding to cover all expenses.