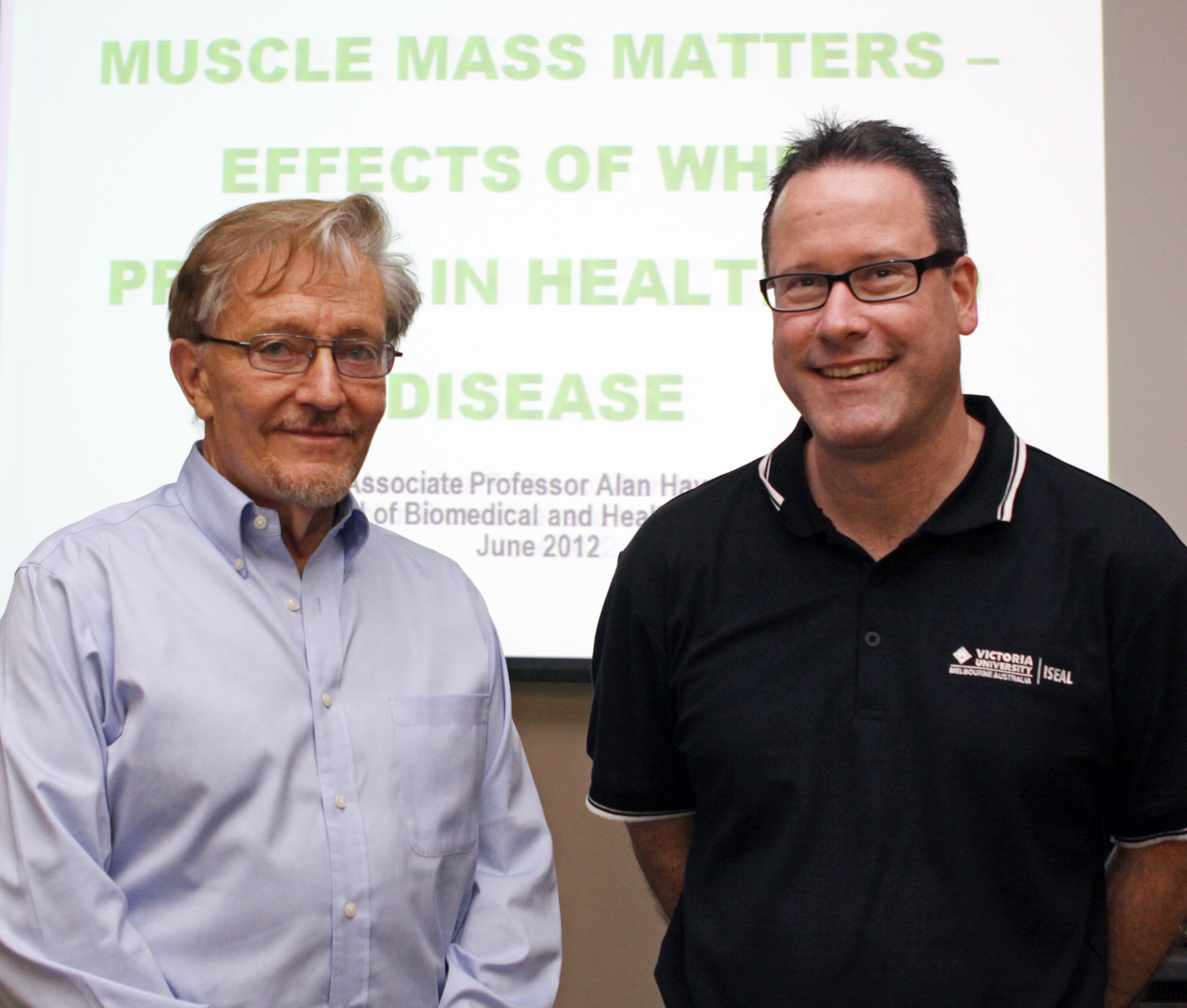 More than 8,000 miles may separate The University of Texas at El Paso and Victoria University (VU) in Melbourne, Australia, but technology has made it possible for faculty and students at both institutions to stay connected.

João Batista Ferreira-Pinto, Ph.D., director of UTEP’s Center for Interdisciplinary Health Research and Evaluation in the College of Health Sciences, and Alan Hayes, Ph.D., assistant dean for the Centre For Health, Research and Education (CHRE) from Victoria University, are prime examples of how the Internet can create a successful teaching collaboration between two universities that are on opposite sides of the world.

In 2009, Ferreira-Pinto and Hayes launched the Health Research Symposium, a monthly live video conference where doctoral students from UTEP and VU present their research on such subjects as sports-related medicine and kinesiology.

“Because of technology, distance is no longer an excuse,” Hayes said. “There’s no reason you can’t get things going. There may be problems with logistics and time differences, but in general they’re not insurmountable.”

The symposiums are a component of the VU/UTEP Global Engagement and Learning Program, which is a partnership between Victoria University and UTEP that links students, faculty and staff in both institutions using advanced technology.

Hayes traveled to El Paso for the first time and presented a lecture on his research – “Muscle Mass Matters – Effects of Whey Protein in Health and Disease” – at UTEP’s Health Sciences and Nursing Building on June 5.

A muscle and exercise physiologist, Hayes’ research focuses on skeletal muscle function and maintaining mass. He has been looking at the effects of muscle and aging with a particular emphasis on whey protein.

“If you listen to the nursery rhyme, ‘Little Miss Muffet, sat on a tuffet, eating her curds and whey,’ that’s where it came from. She was making herself big and strong, so she could scare the spider,” Hayes explained with a laugh.

Although Ferreira-Pinto and Hayes have coordinated the symposiums together during the last three years via email and Skype, Hayes’ visit to El Paso was the first time the researchers met in person.

“The normal pleasantries you have to go through when you meet someone for the first time, we haven’t needed to do that,” Hayes said. “We get into conversations about work, about life, about whatever.”

Ferreira-Pinto added, “It’s like when I go back to Brazil, and my friends and I pick up the conversation where we left off. We keep in touch during the year. It’s the same thing that happened here.”

The symposium also makes it possible for students in both countries to develop similar collaborations with their counterparts online.

During the hour-long video conference, one student from UTEP and one from VU each take 15 to 20 minutes to present their research. Their presentations are followed by a question-and-answer session where participants from both countries exchange ideas.

“It’s a really great opportunity for our graduate students to deliver a talk to an international audience. It gives a different perspective,” Hayes said.

April’s symposium featured Nicholas Murray, a research associate in UTEP’s kinesiology department and a Ph.D. student in the Interdisciplinary Health Sciences Program. Murray’s presentation was on the assessment of ocular motor control and balance in athletes with or without concussions. His project examines how the eye and sense of balance are affected after a concussion episode.

“It is a bit different than presenting to an audience,” Murray said. “However, I found it very useful to receive feedback from other professionals and students with a very different perspective on research and academia in general.”

Murray said the symposium has made it possible for him to pursue opportunities for a postdoctorate position at VU.

Venkata Naga Pradeep Ambati, a graduate research assistant in the College of Health Sciences, also had the opportunity to present his research on “Constraining eye movements while redirecting walking trajectories in young adults.”

Ambati said the feedback that he received after his presentation from the VU participants made him think about his research protocol and also about research questions for future projects.

Ferreira-Pinto said the symposium provides an avenue where students can discuss their research openly in a nonthreatening environment.

“It could be the fact that they are not in competition,” Ferreira-Pinto said. “We are there to help each other and to listen and learn. It’s been a very nurturing mentorship for people from Victoria and from UTEP.”

According to Hayes, UTEP and VU share similar demographics – both universities are located in culturally diverse populations; many students at both schools are the first in their family to attend a university; and western Melbourne, where VU is located, has a higher incidence of diabetes and mental health diseases than most other areas of the country.

To date, VU and UTEP have had nearly 20 video conferences. The 16-hour time difference proved to be a challenge at first, but both universities quickly adjusted. The symposiums take place at 4 p.m. on the third Wednesday of the month at UTEP, which is 8 a.m. on the third Thursday of the month in Australia. The chats also are arranged around each university’s summer schedule, which in Australia is from December through February.

The next conference will take place in September. Future goals include starting collaborative research projects between the universities, offering an online course to UTEP and VU students, and creating a student exchange program, where UTEP students travel to VU for one semester to conduct health sciences research, and vice-versa.

“I think it (student exchange) would be a very enriching experience for both sides and it would open all kinds of venues,” Ferreira-Pinto said. “You get different perspectives and they get to notice things that we don’t because we’ve been here all the time.”