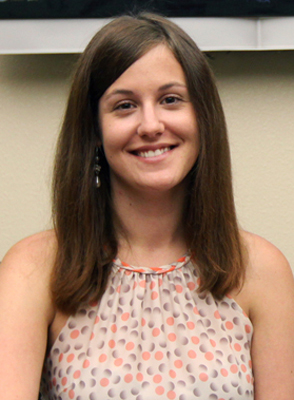 As the world slowly moves toward less gas consumption and more fuel-efficient, eco-friendly vehicles, the fuel tax may no longer be a viable source of revenue for the road infrastructure system.

But that’s OK because there are other alternatives, according to Marketa Vavrova, a student enrolled in The University of Texas at El Paso’s civil engineering doctoral program – and she can tell you whether or not they will be successful in your city, state, or country.

“The thing is that engines are becoming more efficient – there are electric vehicles now, so fuel will no longer be the only reliable source of funding for transportation projects soon,” Vavrova said.

In her recent award-winning master’s thesis, Vavrova suggests a distance-based toll model, or a vehicle miles traveled (VMT) fee. She also discusses a gas emissions policy revenue based on the type of vehicle running. The thesis then provides guidelines and a model for interested decision makers to evaluate if their country would benefit from a distance-based toll implementation.

“Countries are trying to find new ways of funding transportation projects, and this would charge road users for every mile they drive, not for fuel,” she said.

Vavrova will receive the European Friedrich List Award for her thesis at a ceremony Nov. 8 in Budapest.

“It’s a very important award over there,” said Carlos Chang, Ph.D., an assistant professor of civil engineering at UTEP and Vavrova’s academic adviser. “She competed against a lot of people because it’s not just for one country – it’s for all of Europe.”

Vavrova conducted her research while enrolled in the Atlantis program, or the Transatlantic Dual Master’s Degree Program in Transportation and Logistic Systems. Atlantis is a collaboration between Czech Technical University (CTU), the University of Zilina in Slovakia, and UTEP that allows students to attend and earn master’s degrees from both CTU and UTEP in two years.

Thanks to the program, Vavrova who is originally from the Czech Republic, was able to spend her first year studying transportation at CTU, and her second year at UTEP. That gave her the opportunity to compare and contrast road use charges in the United States and Europe.

“Here in Texas, road user charging is not wholly developed, so there is huge potential,” she said.

For example, in Europe, trucks are tolled for the number of axles they have because more axles cause more damage to the road. They also are charged based on their emissions rate and potential damage to the environment.

Chang believes that Vavrova’s thesis was so exemplary because of the comparisons she was able to make while enrolled in the cross-Atlantic program. Ladislav Bina, Vavrova’s academic co-adviser at CTU, also recognized the added value of conducting joint international research.

“Other students enrolled at just one university would not have been able to do this,” Chang said. He added that the Atlantis program not only helps students gain important cultural experiences abroad, but improves the faculty’s own knowledge in the transportation field.

Alejandra Gallegos’ experience in the program is also a good example of its success.

Gallegos was the first UTEP student to enroll and go to CTU. She called her nine months there academically and personally enriching. The experience has broadened her knowledge and abilities in the transportation and logistics field to include emerging technologies. At the same time, her interactions with an international cadre of peers and mentors have allowed her to re-examine her own strengths and weakness and reassess her capabilities.

“I am more than satisfied with the experience in the Czech Republic,” Gallegos said. “I know it will definitely impact my life in a positive way and open the door to many opportunities.”

Her research proposed a hybrid technique for calibrating network-level performance models for concrete. Chang, her adviser at UTEP, said “the hybrid technique represents an improvement when compared to the current models since they merge expert opinion with statistical techniques.”

As for Vavrova, after graduating with master’s from both universities in May, she decided to stay in El Paso and at UTEP to earn her Ph.D.