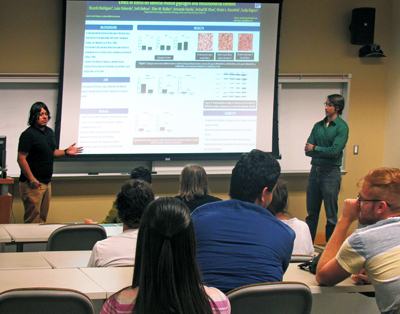 Computer science and special education majors do not normally meet to discuss each other’s research. However, Amanda Sepulveda and Garrett Shaw met several times throughout the spring 2014 semester to share their research with each other in preparation for a competition funded by the Campus Office of Undergraduate Research Initiatives (COURI).

Sepulveda is a special education major researching autism spectrum disorder, and Shaw is a computer science major researching optimization of high performance computing. They made up the winning team among 50 that competed in COURI’s “Explaining Research to a Non-Expert Audience” competition April 16-17.

The competition was the prelude to a two-day undergraduate research symposium hosted by COURI April 25 and 26 that gave undergraduates the chance to present and discuss their research with faculty, peers and the El Paso community.

COURI was founded to help engage undergraduates in scholarly research. The purpose of the competition was to prepare students to present their research to audiences that may not be familiar with the jargon normally used in that field. Students were divided into teams of two – each from a completely different discipline – and had to present their teammates’ research in two minutes. The success of the teams in the competition was based on the students’ ability to explain their research to their partners, as well as the presentation itself.

The students are given an opportunity to work with an expert mentor and a supervisor to conduct their research.

“The idea behind this competition is to try to teach students how to explain their research to others, [such as] politicians and policymakers, who might not be experts in that field,” said Lourdes Echegoyen, Ph.D., COURI director.

Sepulveda said one of the things that interested her in research was the possibility of making a difference in her field.

For Shaw, the competition helped him take a step back from the research and think about it in layman’s terms.

“We communicated well and we really did sit down beforehand and discuss the main points we needed to hit,” he said about his interaction with Sepulveda. “It is difficult to avoid getting caught up in the research, and this competition helped me explain exactly what I do in layman’s terms, so everyone can understand.”

Sepulveda said that this opportunity forced her to ask and answer some important questions about her research.

”Why would the general public care? Why is my research important to the world?” she said. The answers to these questions led to a better understanding of her topic and a more universal appeal and applicability to her research.

Echegoyen said she was pleased with the way the competition turned out.

”I was very happy with how well all the students handled their presentations,” she said at the final COURI awards ceremony April 26. “I know it is not easy doing this, but the payoff is well worth the effort every one of you put in.”

Christy Ruby is a senior majoring in multimedia journalism who writes for borderzine.com.