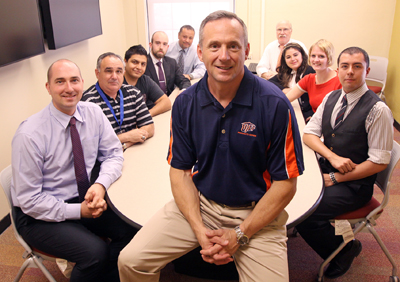 Growing concerns about cyber threats along the border that could impact energy, business and other industries are the reason behind the one-day seminar hosted by The University of Texas at El Paso that will address aspects of cyber security as part of a continuing series funded by the Department of Homeland Security (DHS).

Speakers will discuss risk management, recognition of various levels of cyber attacks, cyber capabilities of cartels and other adversaries, and other pertinent topics as part of the Homeland Security Seminar Series that is part of the $1.6 million grant awarded by the DHS’s Science and Technology Directorate.

“The beauty of this topic is that the Homeland Security (leaders) asked for this training. This is a perfect opportunity for those in the industry to share their valuable expertise with others who work within Homeland Security in this region,” said Victor M. Manjarrez, associate director of UTEP’s National Center for Border Security and Immigration (NCBSI).

The series is one of the eight academic and research projects organized the NCBSI. The projects involve University faculty and both graduate and undergraduate student researchers. Each project has begun or will begin shortly with the assistance of DHS personnel, Manjarrez said.

The education programs include the Homeland Security Summer Scholars Academy, the creation of an online bachelor’s degree in security studies, a revamping of Customs and Border Protection leadership training, a review of the basic Border Patrol Academy curriculum, and a Homeland Security Seminar series.

“DHS views all of the projects as home runs,” said Manjarrez, a former U.S. Border Patrol sector chief in El Paso and Tucson, Ariz. “It’s exciting to be able to utilize the faculty expertise to work toward real-world solutions. We’re offering tremendous opportunities for research in these fields.”

The NCBSI was established at UTEP in 2008 as one of the Department of Homeland Security’s 12 Centers of Excellence based at universities nationwide. Each center has a different focus, from border security to terrorism to coastal hazards, but all share the same goal: supporting the DHS.

Michael R. Smith, Ph.D., vice provost for strategic initiatives, director of the NCBSI and principal investigator of the grant projects, said the NCBSI worked with stakeholders to determine the best projects to pursue. He, working with Manjarrez, crafted the scope of the work and then approached several UTEP faculty members to see if they and their student researchers could help with these mutually beneficial projects.

“What we tried to do in each of these cases was to present to the project directors what it is we’re trying to do, the importance of it, and the role that they can play,” said Smith, a former police officer who earned a law degree. “We tell them that it will be fun and everyone will learn a lot and maybe we can do some good along the way.”

One of the top requests from law enforcement stakeholders was for an online bachelor’s degree in security studies, Smith said. This would be open to everyone, but especially useful to U.S. Customs and Border Protection personnel who want to earn a degree, but often have changing work schedules and remote duty stations.

Larry A. Valero, Ph.D., director of UTEP’s Intelligence and National Security Studies program, said the degree is in the early planning stages, but a formal proposal should be submitted later this year. He is gathering information from course developers and subject matter experts from across the country to create this new degree plan.

“This degree will help many in their careers, especially those seeking a flexible, but rigorous online undergraduate program to complete their college education,” Valero said.

The first 2013 grant-funded activity was this summer’s successful 10-week scholars’ academy that involved 11 undergraduate students from around the country – including UTEP – who got a first-hand look at security-related research and insights into the how, why and what of the way things get done at DHS agencies.

Smith called the grant a team effort that capitalized on the expertise of everyone involved to coordinate the multidisciplinary academic/research grant. As this is the center’s last year to receive DHS funding, he plans to reapply and, because of the NCBSI success during the first five years, he is confident the DHS will decide to approve funding the program for another five years.