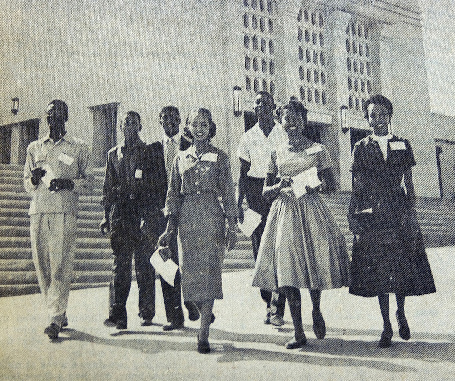 For 100 years, UTEP and the El Paso branch of the NAACP have been enriching the local community while contributing to equal rights on a national level.

From the moment the first African-American students stepped onto the UTEP campus in 1955, El Paso-area members of the NAACP stepped forward to help those students feel welcome and receive the support they needed to be successful academically as well as in day-to-day life.

“When things were still segregated, NAACP members would pick students up from campus and take them to their homes for meals or holidays,” said Director of African-American Studies Maceo Crenshaw Dailey Jr., Ph.D. “They’d show them where they could eat, shop and get a haircut.”

At 100 years old, El Paso’s NAACP is the oldest in the state of Texas and demonstrates the community’s willingness to move forward when much of the rest of the country was reticent to do so. UTEP provided further proof in that regard when men’s basketball coach Don Haskins started, for the first time, an all-African-American lineup in the 1966 NCAA championship.

As proof of the attitude shared by many El Pasoans during the segregation era, Dailey shared a story told by NFL legend and former UTEP track and football star Don Maynard. While on the team in the 1950s, Maynard was traveling to a meet with his fellow athletes when they stopped for lunch at a roadside diner. After his African-American teammate was told that he had to take his lunch outside and eat it on the curb, Maynard said, “Well then, make it two – I’m going to go sit with him.”

In 1979, Benjamin Hooks, executive director of the national NAACP, traveled to the University campus and spoke at Magoffin Auditorium as part of UTEP’s Black History Week program. That commemoration has now evolved into Black History Month. Every year, it reaches out to the community to incorporate many different walks of life and multiple generations to raise awareness of how far society has come and what still needs to be done to promote equality for all minorities.

“In my 17 years here at UTEP, the collaborations between the NAACP and UTEP have worked wonderfully well to keep the focus on issues of racism and what can be done to address this plague on the American body politics,” Dailey said. “UTEP and the NAACP have worked together to bring in prominent speakers and experts on the topic of race; to celebrate significant events and holidays in the African-American community such as Black History Month, Martin Luther King Jr. Day and Juneteenth; and to bring together students and community members to discuss major questions pertaining to race relations.”

Lifetime NAACP member Donald Williams was elected UTEP’s first black Student Government Association (SGA) President in 1972. During his term with SGA, Williams became close to then-University president Arleigh B. Templeton and credits the leader with opening the door for him to attend law school at The University of Texas at Austin. The ambitious student went on to become El Paso’s first African-American judge.

He focuses his support on the institution that got him started on the track to professional success and created the Donald L. Williams Endowed Student Enhancement Fund.

“I’ve given and will continue to give as much time and resources as I can to UTEP,” Williams said. “Personally, its administrators, faculty and staff have meant to everything to me. I met my wife of almost 42 years there, too.”

U.S. Rep. Barbara Lee, who represents California’s 13th District, is the daughter of one of the first 12 African-American students who broke the color barrier at UTEP in 1955.

“With the bold actions of the NAACP, my mother Mildred Parish Tutt [now Massey] was empowered to fight job discrimination and other forms of institutional racism throughout her life,” Lee said. “She taught her children that it can be done and that we too deserve the opportunity to achieve the American dream. I would never have had the courage and confidence to run for public office had it not been for her courageous actions.”

In 1955, the NAACP chapter in El Paso sought to create a test case to challenge the segregation clause contained within Article VII of the state constitution. The ball officially got rolling when the local NAACP committee selected Thelma White, valedictorian at segregated Douglass High School, as the student who would help push this agenda. (A previous UTEP News story details more about White and the role she played in this significant historical event.)

In an interview with the El Paso Herald-Post, Mrs. W. M. Williams, chair of the NAACP legal redress committee, accompanied White and described it to the El Paso Herald-Post during an interview that ran Sept. 22, 1954: “We talked with the registrar and the acting president. They were very nice. But they explained that Negro children cannot be admitted. I thought the Supreme Court decision was supreme.”

The following spring, White and her attorneys (including soon-to-be Supreme Court Justice Thurgood Marshall) filed suit in federal district court charging Acting President Smith, TWC, and The University of Texas with denying White equal rights under the United States Constitution. On July 18, the court ruled in favor of White and ordered all Texas schools to immediately desegregate.

As the first – and only, at the time – desegregated undergraduate institution in the State of Texas, TWC admitted its first African-American students in fall 1955. Invited to enroll were Joe Atkins, Bernice Bell, Mabel Butler, Sandra Campbell, John English, Marcellus Fulmore, Silverlene Hamilton, Margaret Jackson, Leonard McNeece, William Milner, Clarence Stevens and Mildred Parrish Tutt. In 2005, these trailblazers were invited back to campus for the 50th anniversary of the University’s integration.

Williams is doubly proud of his alma mater and its association with an organization to which he has long been committed.

“The El Paso lawsuit desegregated all of the Texas undergraduate schools of higher education,” he said. “That was initiated by the local NAACP branch.”

For many years, the El Paso NAACP has awarded scholarships to deserving local high school seniors, thus giving many students the opportunity to continue their education at UTEP and other institutions of higher learning. Overall, it has been a mutually beneficial partnership for many years.

“I hope that all UTEP students recognize they stand on the shoulders of these original 12 and commit themselves to academic excellence, civic, human and civil rights and social justice engagement,” Lee said. “In so doing, they uphold the legacy and make the NAACP, El Paso and the 12 students very proud.”