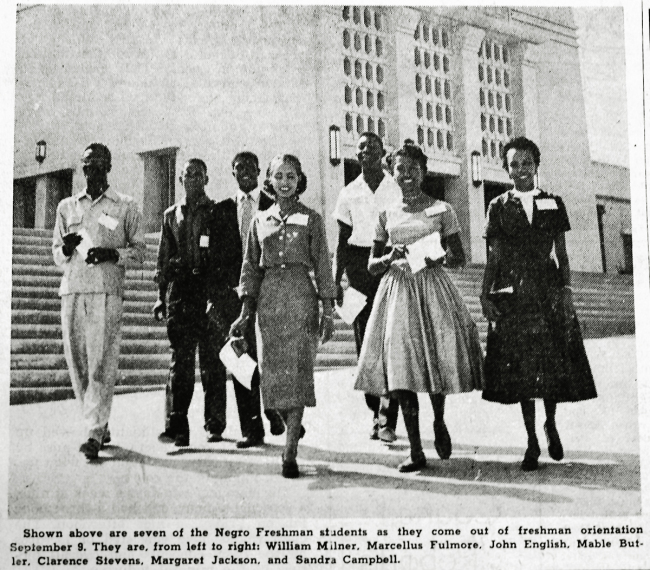 For 100 years, UTEP and the El Paso branch of the NAACP have been enriching the local community while contributing to equal rights nationwide.

From the moment the first African-American students stepped onto the UTEP campus in 1955, El Paso-area members of the NAACP stepped forward to help those students feel welcome and receive the support they needed to be successful academically as well as in day-to-day life.

At 100 years old, El Paso’s NAACP is the oldest in the state of Texas. It demonstrated the community’s willingness to move forward when much of the rest of the country was reticent to do so.

“Collaborations between the NAACP and UTEP have worked wonderfully well to keep the focus on issues of racism,” said UTEP Director of African-American Studies Maceo Crenshaw Dailey Jr., Ph.D. “UTEP and the NAACP have worked together to bring in prominent speakers and experts on the topic of race; to celebrate significant events and holidays in the African-American community such as Black History Month, Martin Luther King Jr. Day and Juneteenth; and to bring together students and community members to discuss major questions pertaining to race relations.”

He supports the institution that got him started on the track to professional success through the Donald L. Williams Endowed Student Enhancement Fund at UTEP.

U.S. Rep. Barbara Lee, who represents California’s 13th district is the daughter of one of the first 12 African-American students who broke the color barrier at Texas Western College in 1955.

“With the bold actions of the NAACP, my mother, Mildred Parish Tutt [now Massey], was empowered to fight job discrimination and other forms of institutional racism throughout her life,” Lee said. “She taught her children that it can be done and that we too deserve the opportunity to achieve the American dream. I would never have had the courage and confidence to run for public office had it not been for her courageous actions.”

In 1954, the NAACP chapter in El Paso sought to create a test case to challenge the segregation clause contained within Article VII of the state constitution.

The ball officially got rolling when the local NAACP committee selected Thelma White, valedictorian at segregated Douglass High School, as the student who would help push this agenda.

The local NAACP assisted her with her application to Texas Western College and drove with her to the campus for clarification after her mail-in application was denied. Despite their appeal, White was not admitted and she went on to enroll at New Mexico A&M College in Las Cruces.

In the spring of 1955, White and her attorneys (including soon-to-be Supreme Court Justice Thurgood Marshall) filed suit in federal district court, charging the college, its president, and the University of Texas with denying White equal rights under the United States Constitution.

On July 18, the court ruled in favor of White and ordered all Texas schools to immediately desegregate.

Recalling how she approached such a momentous step, Jackson Bell said, “I came to UTEP with a positive attitude. People were mostly nice and smiled, and I recall one student who approached me and said, ‘I’m so happy you are here.'”

Fullmore told of the downside of being one of the first.

“I had trouble with some teachers who weren’t ready to deal with black students,” he said, adding that he regretted not being able to go further in ROTC given the difficulties he faced.

Massey still feels honored to have been one of the 12 and is grateful to the NAACP for the support, encouragement and legal framework they provided her and her peers to take such action.

The relationship between UTEP and El Paso’s NAACP continues via scholarships that the organization has awarded to deserving local high school seniors, thus enabling many students the opportunity to continue their education.

“Take this baton which we have passed to you and work with the NAACP in its ongoing fight for racial, social and economic justice,” she said.